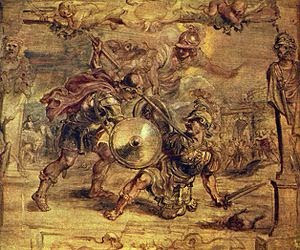 How an Ancient Act of Terror Brought Down a Republic

from HHN.us: That arresting new image invites comparisons to Osama bin Laden. After 9-11, international commentators of all stripes, from US conservatives to Italian leftists and Islamist militants, alluded to Mithradates, his terror attack on 80,000 Roman civilians in 88 BCE, and his ability to evade capture. Current events leap to mind. Mithradates’ revolt plunged the Romans, already reeling from internal violence and foreign conflicts, into financial chaos and lured them into costly wars in the Middle East.


For 2,000 years, Mithradates was a household name, alongside Hannibal, Spartacus, Cleopatra, and other illustrious figures. Then—except for a few literary souls who recalled the poem “Mithradates, he died old”—he faded from popular memory. He’s  languished in obscurity for more than a century.
Now, just as President Obama undertakes the toughest decision of his Administration—ordering more US troops to Afghanistan—this ancient hero/anti-hero is making a comeback. As the rebel king swaggers out of the shadows, an intriguing question arises: Who IS Mithradates?


In 88 BCE, a shocking terror attack took place in Anatolia (western Turkey). In a single day, in more than a dozen cities, at least 80,000 men, women, and children were massacred, many as they huddled inside temples where they fled for refuge. The victims were Roman and Italian tax collectors, merchants, and slave traders who had planned to get rich from Rome’s latest acquisition in the Near East.


In each town, the slaughter was carried out by ordinary people. The victims were targeted by language. All who spoke Latin or Italian dialects were killed, while thousands of Roman slaves who spoke other languages were spared. The massacre of 88 BC has been neglected by modern historians, but it could serve as a case study for how leaders mobilize citizens to perpetrate what is today termed “eliminationist” genocide.


The massacre of the Romans was orchestrated by a charismatic, brilliant ruler of a small kingdom on the Black Sea. His followers saw him as the long-awaited savior who would liberate the East from an evil Western empire, as predicted in ancient oracles.


The king’s name was Mithradates Eupator (“good father”) of Pontus, descended from Persian kings and Macedonian royalty. He presented himself as the defender of the great Alexander’s Greco-Persian empire against the predatory Roman Republic. Hailed as a liberator throughout Persian-influenced Eurasia, Mithradates drew allies from Spain and Gaul, the Italian countryside, Greece and the Balkans, from the Black Sea to Armenia, ancient Iraq, and Iran.


Meanwhile, after the defeat of its dire enemy Hannibal, Rome had emerged as the world superpower, expanding its imperial reach in Europe, Africa, and Asia. Wealth was concentrated in the hands of the powerful. An army once manned by citizen soldiers was now staffed by Rome’s poorest, resulting in professional troops loyal to ambitious leaders seeking profit and glory.


Mithradates had protested Rome’s corrupt policies in Anatolia through diplomatic lines, but in vain. To teach this “minor king” a lesson, a Roman commander—without Senate authorization—invaded Mithradates’ kingdom with a reluctant coalition of neighboring states. Mithradates’ army routed the Roman-led invasion. He executed the Roman commander, but released the prisoners of war, who promptly joined his forces.


Mithradates’ victorious armies swept across Anatolia, liberating Greece from Roman rule and driving the Romans out of their former Province of Asia. To get rid of any who remained, he ordered the massacre of 88. That wiped out the Roman presence in the Near East and caused a catastrophic financial collapse in Rome, a crisis that today’s economic historians are finding eerily familiar.

In Rome, the reaction was fear and outrage. Mithradates’ timing was impeccable. The  Romans were distracted by slave uprisings, rising domestic violence, and impending civil war. The Senate dispatched the ruthless general Sulla to avenge the massacre and destroy Mithradates. Sulla’s departure was delayed, because to finance their war on terror, Rome was forced to auction off its most sacred ancient treasure. Meanwhile, fleets of pirates—allied with Mithradates—cruised the Mediterranean, preying on Roman ships.


The ensuing Mithradatic Wars dragged on for decades, with some of the biggest battles and highest casualties in all antiquity. A pioneer in asymmetrical, unconventional tactics, Mithradates’ fighting style perplexed the experienced Roman troops, luring them deeper into barren landscapes, and leading to mutinies, fragging, and desertions. Rome’s top generals won battle after battle, but failed to lay their hands on Mithradates. His uncanny ability to elude capture unnerved the Romans. Despite crushing defeats, Mithradates easily recruited new armies and allies. Today, US military commanders in Iraq and Afghanistan dread this phenomenon, called the “Tet Offensive effect,” in which an enemy gains support and morale in spite of massive defeat. “Somehow,” exclaimed the Roman statesman Cicero, “Mithradates accomplished more by being defeated than if he had been victorious!”


After decimating Mithradates’ forces, the frustrated Romans saw their prey slip away, rescued by pirates, sheltered by his allies, hiding out in rugged terrain, escaping over secret mountain passes—and then surging back with new armies. Mithradates was never short of cash: even when losing battles he paid his soldiers in gold, in contrast to the Roman legionnaires who had to live on whatever they could loot.


In the First Mithradatic War, Sulla defeated Mithradates’ forces in Greece, then declared his mission accomplished, letting Mithradates off with a paltry fine. Taking advantage of his victory, Sulla rushed back to Rome, already in the throes of bloody civil war. Seizing power as Dictator, Sulla oversaw the dismantling of the Roman Republic.


Sulla’s failure to pursue Mithradates allowed Rome’s eastern Hannibal to come back even stronger. Mithradates’ smashing victory in the Second Mithradatic War gave him control of the seas, dominated by his pirate allies, who now manned a thousand swift ships.


Before he could take command of Rome’s Third Mithradatic War, Pompey had to carry out an expensive campaign to quash the pirate armada. Finally engaging with Mithradates, Pompey dealt the king a decisive defeat, but the wily rebel leader escaped yet again. He led Pompey on a wild goose chase across the rough country of Armenia and Azerbaijan, into what is now Georgia. Pompey, in pursuit, lost many men to ambush, toxic honey, poison arrows, and vipers. Utterly flummoxed as Mithradates went to ground, Pompey gave up the chase at the foot of the forbidding Caucasus. Assuming his foe was doomed to frozen death if he tried to cross the 10,000 foot mountain range, Pompey declared victory and marched off to Jerusalem, seeking more glory.


To everyone’s amazement, Mithradates popped up in the Crimea. When Pompey refused his request for peace negotiations, Mithradates raised a new army and prepared to invade Italy. Ultimately, betrayed by one of his sons, Mithradates, lost his kingdom and his life, in 63 BCE. But the Romans also lost something precious—government by “the Senate and the People (SPQR).” The Republic never recovered from the Mithradatic Wars.


Keeping in mind that “the past is a foreign country,” we can still find lessons in history. We are not Rome. Osama bin Laden is not Mithradates. Afghanistan is not our Mithradatic War. But our leaders must understand the value of historical mirrors in decision making. As the President and his advisors tackle the options for a positive outcome in Afghanistan, it is worth pondering what happened when a terror attack ignited interminable wars in the first century BCE.