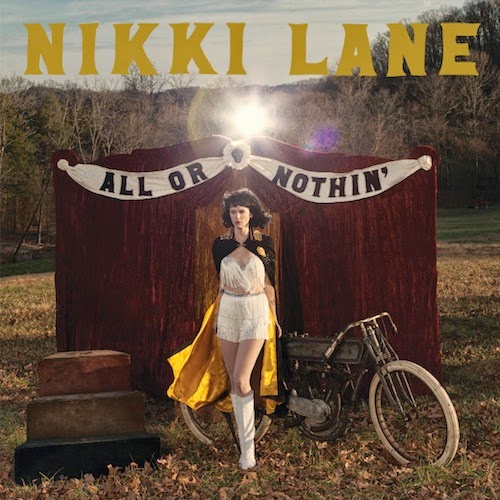 Nikki Lane
"I Don't Care/Right Time"
'All Or Nothin''
New West, 2014
Notes: "Black Keys frontman Dan Auerbach has impressive taste when he chooses female vocalists to produce. From Jessica Lea Mayfield to Grace Potter, Valerie June and now Nikki Lane, he hasn’t missed yet... With Nikki Lane, Auerbach takes her girlish voice and the retro pop/country tendencies she introduced to the world on her 2011 debut, and adds a dose of confidence to the already spirited sound... Songs such as “I Don’t Care” jump out of the speakers like the best Lesley Gore singles... Lane’s sexed up sassy testifying on cuts like the opening “Right Time”...with in-the-pocket production that walks a nifty tightrope between ’60s countrypolitan and ’00s gutsy Americana..." We heard "Seein' Double" from Ms. Lane two weeks ago Episode112.
(@NikkiLaneMusic)

Clap Your Hands Say Yeah
"As Always"
'Only Run'
self-released, 2014
Notes: "Clap Your Hands Say Yeah, a stable five-piece for eight years and three albums, were whittled down to two... [Frontman/producer Alex] Ounsworth’s words are especially tough to distinguish on Only Run, but the first three on opener “As Always” are “I’m too weak,” and that says plenty. His voice, frequently coming through gleaming, synthetic oceans of sound that he washes over the album, sounds alone." 'Only Run' was mixed by my favorite noisemeister, Dave Fridmann.
(@CYHSYband)

Los Mundos
"Lentes Mágicos"
'Retroterapia'
SourPop, 2014
Notes: "[Los Mundos], amusingly entertaining songwriters, of Monclova, Mexico have released their scuzzy sophomore LP, Retroterapia and, since their release, we’ve all been able to sample some of the trippy shoegaze our neighboring country has been cranking out. Appealing to both punks and partiers alike, Los Mundos‘ spontaneous sound defies typical convention, choosing to wander into the weird world of the whimsical and surreal... “Lentes Mágicos” translates to “Magical Glasses”..." And they ain't talkin' about prescription glasses either - unless they have an extra lens for your third eye! This is the first of 4 songs this week from KEXP that highlight the Latin alternative scene...
(@Los_Mundos)

Mr. Scruff
"Deliverance"
'Friendly Bacteria'
Ninja Tune, 2014
Notes: "Andy Carthy, aka Mr. Scruff, spins the gamut as a DJ and a producer. He's inspired by those same varied influences and turns them into his unique songs embedded with subtle humor." The Manchester multi-talent says, "I also have my own tea company."
(@MrScruff1)

Grace Weber
"Perfect Stranger"
'The Refinery'
PledgeMusic, 2014
Notes: "At age 17, the Milwaukee-born, Brooklyn-based singer earned a Presidential Scholar in the Arts, which culminated in a performance at the Kennedy Center. In 2009, Weber was picked out of 400,000 applicants to appear on Oprah, singing “Natural Woman”...a live set on The Today Show and SXSW “One To Watch” NPR. Even with all the accolades, Weber approached her second album simply. Growing up, she considered Etta James, Dinah Washington, and Lauryn Hill as her “voice teachers,”..."
(@GraceWeberMusic)

Thus Owls
"How in My Bones"
'Turning Rocks'
Secret City, 2014
Notes: "Stockholm / Montreal outfit...Fronted by husband and wife duo Erika and Simon Angell, Thus Owls new material follows on from 2010′s visceral Cardiac Malformations and displays a more refined level of song smithery – showcased wonderfully throughout “How In My Bones”. Almost touching upon prog territory, the duo embrace a more organic approach to their craft which sees them at their most accessible to date."
(@ThusOwls)

Trombone Shorty
"Do To Me" (Live On KUTX)
'For True'
Verve, 2011
Notes: "Trombone Shorty comes from an impressive pedigree. Born Troy Andrews...[he]grew up in the Treme neighborhood of New Orlean’s Sixth Ward, absorbing the sounds of his home. A musical prodigy, the 28-year-old has been playing instruments since before he could barely hold them.... In 2005, and still a teenager, Andrew was asked by Lenny Kravitz to join his touring band... he’s also played with Jeff Beck, Warren Haynes, Galactic, the Dave Matthews Band and the Neville Brothers... “Do To Me” is a perfect example of what Andrews calls “supafunkrock”–taking the traditional and pushing the art form forward into interesting new directions."
(@TromboneShorty)

Joseph Arthur
"Walk on the Wild Side"
'Lou'
Vanguard, 2014
Notes: "Arthur's words come from the liner notes to his new collection, Lou, a tribute album featuring his interpretation of 12 Reed tracks. Now you can take a listen to Arthur's version of arguably the most classic Reed cut, "Walk on The Wild Side": It's a bit odd at first hearing the track without its signature bass slide and Reed's spry acoustic strumming, but by turning the track into a heaving piano ballad, Arthur gives it a fitting sense of nostalgia for Reed's younger, wilder years."
(@JosephArthur)

Cold Beat
"Mirror"
'Over Me'
Crime on the Moon, 2014
Notes: "Cold Beat, a new project helmed by Grass Widow bassist/singer Hannah Lew—felt just a tad askew, its itchy rhythms riddled with static cling. "Mirror", the leadoff single from Cold Beat's debut LP Over Me (out July 8 via Crime on the Moon), finds Lew casting dishevelment aside in favor of two-and-a-half minutes of brisk, agile indie-pop, clear as day and jangly as anything."
(#ColdBeat)