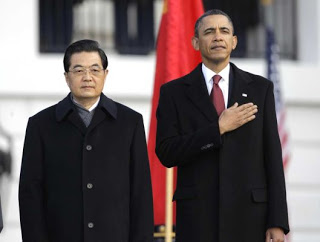 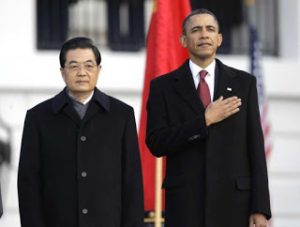 from latimes: President Obama welcomed Chinese President Hu Jintao to the White House on Wednesday morning in a formal ceremony marked by the fanfare reserved only for a visiting head of state... The carefully choreographed ceremony began against the backdrop of music by a Navy brass band. In a display of unity, the South Portico of the White House was lined with alternating Chinese and American flags...

With contingents from the U.S. Coast Guard, Air Force, Navy, Marines and Army gathered on the South Lawn, Obama and First Lady Michelle Obama - he wearing a red tie and she wearing red gloves - greeted Hu as his limousine arrived. A 21-gun salute - set off by cannons along Constitution Avenue - was heard as the Chinese national anthem played. Obama and Hu greeted a small crowd of Chinese students and other guests, shaking hands along a rope line before making their remarks.

"The United States welcomes China's rise as a strong, prosperous and successful member of the community of nations," Obama said. "Indeed, China's success has brought with it economic benefits for our people as well as yours, and our cooperation on a range of issues has helped advance stability in the Asia Pacific and in the world." Hu said his visit was intended to "increase mutual trust, enhance friendship, deepen cooperation and push forward the positive, cooperative and comprehensive China-U.S. relationship for the 21st century"...

Wednesday, Hu will meet with the president and aides and hold a press conference with the president in the afternoon. He'll attend a black-tie state dinner in his honor Wednesday night, with a guest list that features prominent Chinese Americans. After meeting with congressional leaders and business executives Thursday, Hu will move on to Chicago for two days of meetings later in the week. 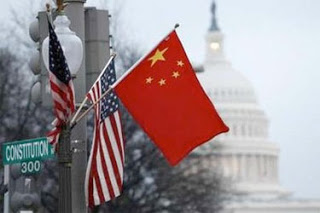