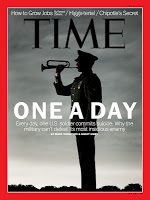 Military Suicide Rate of One A Day – a Spiritual Crisis!

A First Principles Press article, "Psychoactive Drugs and the Military’s Suicide Crisis," sees in present reality the one predicted by Aldous Huxley in "Brave New World,"where solution for state controlled loss of individuality and freedom is "...the widespread use of soma, a medication meant to salve the pain and sorrow of this human and social transformation while keeping the multitude “happy” and without revolt against the state." The article points out reason for explosion in use of psychoactive drugs isn't only military suicide rate: "There is a new trend involving “mental disability” in low-income families that apply for Supplemental Security Income (SSI) payments. MIT economics professor David Autor calls this the “new welfare” as he cites growing numbers of for-profit firms specializing in aiding poor families in securing government SSI benefits; but to qualify, the applicants, including children, must be taking psychoactive drugs. Profits and incentives abound for the families in extra government income, for those for-profit groups assisting families to get increased government benefits and the drug companies too that are helping to sate the segment of the population most likely to revolt (less to lose) in a country where government controls more and more of their daily lives. Soma is all around!" It's apparent we've arrived in a Brave New World!


"As in the Brave New World Huxley portrayed, overuse of drugs and manipulation by pharmaceutical companies is blatant and irrefutable," continues article and only sees more use in the future, "...as the president of the APA last year wrote that the new DSM, scheduled
to come out in 2013 will justify further the use of drugs."

The article believes only a change in course can stem recent 18% rise in suicides, "...the military needs to consider a new direction for supporting our troops, who do in fact have a soul that needs ministry dispensed by caring, talking chaplains and leaders, and not another pill...Our current military leaders have forgotten the strong moral support recorded in history from the War for Independence to the present." The article calls for a renewed spiritual emphasis on prayer!  Is this a soldier's only hope?

In a Business Insider article, " The Army Has Issued Anti-Suicide Nasal Spray To Keep Troops From Taking The 'Easy Out," as statistics complied by Pentagon's own tracking show troops more likely to  "....die by their own hands than by the hands of the Taliban in Afghanistan."   The Pentagon is making extraordinary move to stem loss of manpower by making available a nasal spray, made possible by nanotechnology to deliver relief in an active form "....a naturally occuring neurochemical called thyrotropin-releasing hormone, or TRH, that has euphoric, calming, anti-depressant effects."

The move to readily offer a solution to suicide epidemic, is clear measure of problem's severity!  How far can drugs go to relieve crisis?   Is it possibly the case horrors of high-tech military are too much for any human to bear for such extended periods as the U.S. military has been in Iraq and Afghanistan?  Or, can a human being only engage in combat if there's a clear moral imperative?  The solider becoming inevitably a psychological casualty, if there's little or no belief or justification for the war?