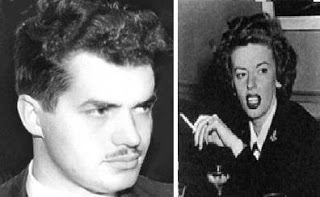 Was John Whiteside Parsons, a self-taught chemist and a founder of JPL, a slimy degenerate or the James Dean of the Occult World? Jack Parsons is a fascinating figure, however one views him. Richard Metzger’s 2003 disinformation essay extols Parson’s lack of hypocrisy. Metzger quotes from Parson’s Manifesto of the Anti-Christ to make his point: “An end to the pretense (sic), and lying hypocrisy of Christianity. An end to the servile virtues, and superstitious restrictions. An end to the slave morality. An end to prudery and shame, to guilt and sin, for these are of the only evil under the sun, that is fear. An end to all authority that is not based on courage and manhood, to the authority of lying priests, conniving judges, blackmailing police, and an end to the servile flattery and cajolery of mobs, the coronations of mediocrities, the ascension of dolts.” Parsons makes valid observations all too true, unfortunately.

A BariumBlues.com blog entry, “JPL – The Occult Roots of NASA,” reveals a man steeped in occult worship, who joined Aleister Crowley’s OTO Agape Lodge in 1941 and briefly led it, who invoked Crowley’s Hymn to Pan before a test launch.  Parsons had intent also of creating a Moonchild through a project called Babalon Working.

A description of the project is provided in the BariumBlues.com blog entry. “The first stage of Babalon involved invoking an ‘elemental mate’ — which, fortuitously enough for Parsons, turned out to be a voluptuous redhead named Marjorie Cameron (pictured), who would later emerge as a star of occult-oriented films by experimental filmmaker Kenneth Anger. Flush with the thrill of success, Parsons and Cameron set out to perform part two of the Babalon working, with [L. Ron] Hubbard taking notes: Wild monkey sex with the goal of creating a ‘moonchild.’ A moonchild in this context is best described as an Thelemic messiah, a magic homonculus monster child along the general lines of ‘Rosemary’s Baby’.”

Parsons will remain an enigma, albeit, a very fascinating one. Metzger reminds in his essay, “Werner von Braun claimed it was the self-taught Parsons, not himself, who was the true father of the American space program for his contribution to the development of solid rocket fuel.” Metzger also asks, “…is the Babalon Working the product of a deranged mind or the ultimate exploration of the absolute furthest reaches of consciousness, putting the peddle to the metal for the living end in revolutionary chic and mind expansion?”

A personal life filled with sex magick and a lifelong Oedipal complex (his once tycoon father left his mother early in Parsons’ life), sully Parsons.  It appears, the close bond between mother and son only ended with Parsons’ “accidental death” in a home laboratory explosion in 1952 and his mother’s suicide the same day. The suspected incest, other sordid relations such as Hubbard’s running off with Parson’s mistress and a questionable finish, makes the present writer conclude: we don’t know Jack! Let this brief account serve as an introduction.