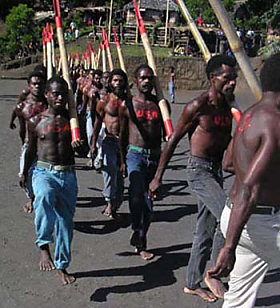 John Frum and the Cargo Cults

from damninteresting.com: Every year on February 15th, natives of Tanna Island in the Republic of Vanuatu hold a grand celebration in honor of an imaginary man named John Frum. Villagers clothe themselves in homemade US Army britches, paint “USA” on their bare chests and backs, and run a replica of Old Glory up the flagpole alongside the Marine Corps Emblem and the state flag of Georgia. Barefoot soldiers then march in perfect step in the shadow of Yasur, the island’s active volcano, with red-tipped bamboo “rifles” slung over their shoulders. February 15th is known as John Frum day on Tanna Island, and these activities are the islanders’ holiest religious service.

The Vanuatu island group lies northeast of Australia and southeast of Malaysia and the Philippines. Prior to contact with Europeans, the people who lived there were primitive tribal societies. Many of history’s stereotypes and legends regarding island cannibals originated from these societies; slain enemies and the occasional missionary were eaten, sometimes in the hopes of gaining magical powers, and other times due to food shortages.

Eventually the New Hebrides islands (as they were then called) were colonized and placed under joint British and French rule. Christian missionaries formed a makeshift government and court system which punished islanders for following many of their long-held customs, such as dancing, swearing, adultery, and polygamy. The colonizers also forbade working and amusement on Sundays. The islanders lived under this oppression for thirty years before a fellow native rallied the people and promised an age of abundance to any who would reject the European ways. He went by the alias “John Frum,” a name possibly derived from the phrase “John from Jesus Christ”— namely John the Baptist. Many islanders joined him, and the cult moved inland to escape the missionaries and return to their old traditions.

One day in the early 1940s, the relatively isolated group of islands was descended upon by hundreds of thousands of American soldiers who arrived by sea and by air. The world was at war, and America had plans to build bases on the Pacific islands. The newcomers recruited the locals’ assistance in constructing hospitals, airstrips, jetties, roads, bridges, and corrugated-steel Quonset huts, all of which were strange and wondrous to the natives. But it was the prodigious amounts of war materiel that were airdropped for the US bases that drastically changed the lifestyle of the islanders. They observed as aircraft descended from the sky and delivered crates full of clothing, tents, weapons, tools, canned foods, and other goods to the island’s new residents, a diversity of riches the likes of which the islanders had never seen. The natives learned that this bounty from the sky was known to the American servicemen as “cargo.”