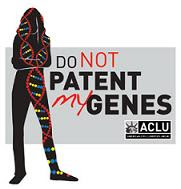 from nytimes: A federal judge on Monday struck down patents on two genes linked to breast and ovarian cancer. The decision, if upheld, could throw into doubt the patents covering thousands of human genes and reshape the law of intellectual property.

The American Civil Liberties Union and the Public Patent Foundation at the Benjamin N. Cardozo School of Law in New York joined with individual patients and medical organizations to challenge the patents last May: they argued that genes, products of nature, fall outside of the realm of things that can be patented. The patents, they argued, stifle research and innovation and limit testing options.

Myriad Genetics, the company that holds the patents with the University of Utah Research Foundation, asked the court to dismiss the case, claiming that the work of isolating the DNA from the body transforms it and makes it patentable. Such patents, it said, have been granted for decades; the Supreme Court upheld patents on living organisms in 1980. In fact, many in the patent field had predicted the courts would throw out the suit.

Judge Sweet, however, ruled that the patents were “improperly granted” because they involved a “law of nature.” He said that many critics of gene patents considered the idea that isolating a gene made it patentable “a ‘lawyer’s trick’ that circumvents the prohibition on the direct patenting of the DNA in our bodies but which, in practice, reaches the same result.”

The case could have far-reaching implications. About 20 percent of human genes have been patented, and multibillion-dollar industries have been built atop the intellectual property rights that the patents grant.