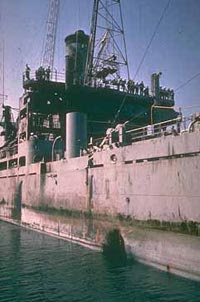 from press tv: A deadly Israeli attack on a US ship – an incident largely kept in the dark by Washington – receives new attention with survivors reliving the painful memory. USS Liberty survivors gathered in Washington on Monday to commemorate the 42nd anniversary of the incident and expound on how they were sprayed with bullets by America’s “closest ally and beneficiary“. On June 8, 1967, the unarmed spy ship USS Liberty was on duty in international waters off the Sinai Peninsula when it was bombarded by Israeli fighter jets and torpedo boats. The two-hour-long attacks killed at least 34 sailors, wounded 173 others and nearly sunk the ship. The attack on the Liberty came at a time when Israel had engaged in a brief but intense war with Egypt and its Arab allies, which coincided with the US war on Vietnam. Although the ship was clearly marked as an American vessel, Israelis declared the attack on Liberty as a simple case of “friendly fire” and “mistaken identity”. Despite overwhelming evidence to the contrary, former US president Lyndon Johnson accepted the Israeli claim and cancelled all investigations into the incident. “It was a case of mistaken identity …I do not care if every man drowned and the ship sank, we will not embarrass an ally,” Johnson had told his opponents who demanded an open congressional hearing to address the Israeli claim. USS Liberty survivor Rick Almett, however, begged to differ. “There was a conspiracy between our government and Israel. So that’s the reason why they didn’t pursue it and why the investigations were covered up because of the alliance of Israel and the United States,” Almetti told Press TV.