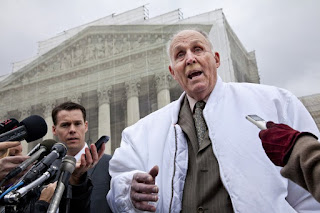 from latimes.com: In a closely watched patent case, Supreme Court justices appeared ready to dash the hopes of an Indiana farmer who claimed the unfettered right to plant the next generation of Monsanto Co.'s genetically modified soybeans.

The justices strongly suggested in oral arguments Tuesday that they would agree with Monsanto that its patent protection covers not just the first planting but also seeds that are generated later from any plantings.

"Why in the world" would any company invest millions of dollars in creating a new seed if a farmer could buy one and freely reproduce it, Chief Justice John G. Roberts Jr. asked.

But the justices said that made no sense for products that are easily copied, or in the case of seeds, copy themselves. They are expected to issue a formal ruling by late spring.

A ruling for Monsanto would be a relief for companies such as vaccine makers and software makers that rely on patents and copyrights to protect their innovations from being copied and to protect their stake in products that can replicate themselves...

At Tuesday's arguments before the nation's high court, the only mystery seemed to be why the justices had voted to hear the farmer's claim that he could get around Monsanto's patent protection by buying next-generation seeds from a grain elevator...

An Obama administration lawyer joined sides with Monsanto in urging the court to reject Bowman's claim.