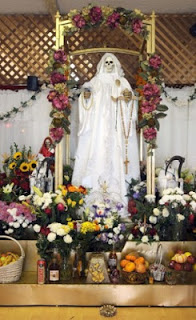 An investigation into 10 year old boy reported missing earlier this month, resulted in eight arrests in Mexican state of Sonora, reports BBC article.  Prosecutors allege suspects belong to cult, Santa Muerte or Holy Death. "Jose Larrinaga, spokesman for Sonora state prosecutors, said the most recent killing was earlier this month, while the other two were committed in 2009 and 2010. Their bodies were found at the altar site in the small mining community of Nacozari, some 70 miles (110km) south of Douglas, Arizona." BBC article clearly attributes sacrifice to cult members, but adds, "there have been no confirmed killings previously attributed to the cult, which follows a mix of Catholic faith with indigenous and pagan beliefs." The cult has been growing in Mexico. Critics say cult is preferred by criminals and drug dealers, while members maintain they're persecuted.  The cult is treated more benignly north of the border in 2009 LA Times article (picture from Los Angeles storefront): "at the weekly Santa Muerte Mass, Guadalupe takes turns with several other spiritual guides to lead a long and somber service that resembles traditional Catholic Masses in Mexico and includes the recitation of a special rosary that incorporates the traditional Lord's Prayer and appeals to Santa Muerte in place of Mary." Wikipedia entry observes, "the robed image of Santa Muerte looks a bit like that of the Virgin of Guadalupe, the patron saint of Mexico." Wow!