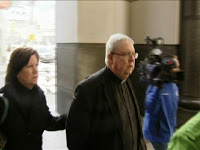 from myfoxphilly.com: The prosecution in the priest-sex-abuse trial involving the Philadelphia Archdiocese wrapped up its fifth week of brutal testimony and documents concerning the deviant acts of priests under Monsignor William Lynn. Prosecutors allege that Lynn, who was secretary for clergy from 1992 to 2004, chose primarily to protect the church from scandal. However, the defense paints a different picture of Lynn; a man who followed the orders of his superior, the late Cardinal Anthony Bevilacqua.