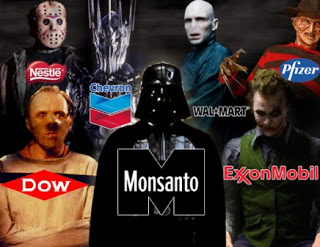 KnowMore.org - Question your goods. Vote with your wallet. 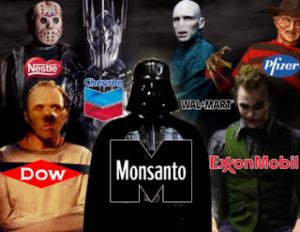 from news junkie post: The so-called “Corporate Responsibility Magazine,” (CRO) has released a list of the 100 most responsible corporations in the world [1.4mb PDF]. Some of the corporations that made it to the list are: #31 Monsanto, #23 Nike, #51 Exxon Mobil, and #8 Coca-Cola.

The magazine has been listing mainstream corporations that are “responsible” every year; interestingly enough, most of these corporations appear year after year. Ranking which corporations make it into the list is decided by how “responsible” they are based on their “environmental and human rights records”, “financial responsibility”, and “philanthropic giving.”

On the other hand, the environmental website, Earth First, published an article last year ranking the seven Most Irresponsible corporations in the world – some of them were in CRO’s magazine list of “Responsible Corporations.”

Corporate Responsibility Magazine didn’t include Halliburton or Xe (formerly known as Blackwater), maybe because that would have been too obvious. Sadly enough, many of the corporations listed tend to sponsor programs on PBS. NPR’s Marketplace has also received support from Monsanto.

Indeed, these corporation are working hard at changing their image and perhaps even history, by trying to appear “responsible” on the surface. Environmental and human rights activists, however, continue to fight to stop the damage these corporations are causing and informed citizens are not likely take CRO’s list seriously. For the Corporate Hall of Shame, click here.