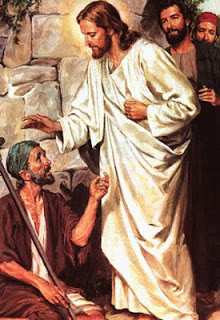 Leprosy in the Bible: Quarantine or Ritual?

from cornell.edu: "Biblical interpretation: Leprosy as an illness brought the assumption that God was punishing a victim for sinning, as the Hebrew word for leprosy, sara’at, meaning "to strike down," suggests. When used in Hebrew texts, sara’at was exclusively used to describe visible disfigurements or discolorations of the skin. Coupled with its verbal connotation, sara’at refers to the concept of a deity striking the sickened. The most direct evidence of a belief in religious sources of illness comes from Deuteronomy 32 where God says: “See now that I, even I, am He, // And there is no god with Me; // I kill, and I make alive; // I have wounded, and I heal; // And there is not that can deliver out of My hand.” (Deuteronomy 32: 39) People in biblical times often attributed the spread of disease amongst their enemies as an act of God, usually through the agency of angels of death.With faith that disease would ravage their enemies, it was a small jump to believe in the punishment of the Israelite unfaithful. Some historians like Maurice Gordon theorize that the biblical faithful believed that the same angels that slaughtered the Egyptian first-borns in Numbers 8:17 and smote the Assyrians in Isaiah 30:31 were the same angels that afflicted the sinful with disease. When treatments from medical practitioners and the priesthood were insufficient for alleviating the suffering, difficult to cure forms of disease such as leprosy of the skin must have been viewed as a serious form of God’s anger."


Continued from the article:
"Throughout biblical record, even kings were not exempted from the quarantine of lepers, and faced dire straights when supposedly afflicted by God. (Gordon, 460-462) King Uzziah, also known as Azariah, was one person named for contracting leprosy for his sins against God. As mentioned in II Chronicles 16: “And in the thirty and ninth year of his reign Asa was diseased in his feet; his disease was exceedingly great…” (II Chronicles 16: 12) “The king was a leper unto the day of his death, and dwelt in a house set apart, being a leper; for he was cut off from the house of the Lord.” (II Chronicles 26: 21) Uziah’s specific sin was burning incense in the house of God. While the biblical author believed that Uziah sinned by performing an act in the responsibility of priests, the sin was not hygienically unclean. Because of this fact, the biblical author clearly attributed the infliction of leprosy through religious causes. Through similar stories of afflicted characters in the Bible, the correlation between incurable diseases such as leprosy and personal sin was expounded as many figures such as Uziah were punished for sins devoid of unsanitary implications. For instance, Naaman the Syrian leper general was a near god amongst his people, yet faced with certain death under God's watch. (II Kings 5: 1) Intially hesitant to bow down to God, Naaman was miraculously healed by Elisha after his complete submission. By depicting the helplessness of these famous lepers, the biblical narrative emphasizes the vulnerability of powerful figures in the grip of leprosy."