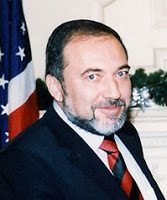 lieberman: US will back israeli strike on iran

from blacklisted news/israel today: Israeli Minister of Strategic Affairs Avigdor Lieberman said on Tuesday that he received the tacit blessing of Europe and the United States for an Israeli military strike on Iran's nuclear facilities.

“If we start military operations against Iran alone, then Europe and the US will support us,” Lieberman told Army Radio following a meeting earlier in the week with NATO and European Union officials.

Lieberman said the Western powers acknowledged the severity of the Iranian nuclear threat to the Jewish state, but said that ongoing conflicts in Afghanistan and Iraq are “going to prevent the leaders of countries in Europe and America from deciding on the use of force to destroy Iran's nuclear facilities,” even if diplomacy ultimately fails.

The message Lieberman said the NATO and EU officials conveyed to him is that Israel should “prevent the threat herself.”