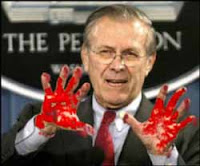 from raw story: Ten months before the US aired formal proof of Iranian involvement in funding Iraqi insurgents, then-Secretary of Defense warned in secret Pentagon memos that Iran should be the "concern of the American people" and he issued explicit instructions to the military.

"[L]ink Iraq to Iran," Rumsfeld wrote in one of thousands of "snowflakes" - short memos distributed throughout the Pentagon during his tenure.

The Washington Post obtained a handful of the memos and published excerpts from them Thursday. A newly disclosed memo, written in April 2006 as Rumsfeld faced retired generals' calls for his resignation, tied Iran and Iraq together and claimed failure in the latter "will advantage Iran."