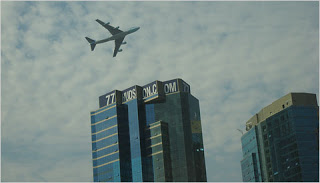 from raw replay: A number of buildings in New York City were evacuated Monday morning after a trio of low-flying planes flew near the Statue of Liberty. “An Air Force One lookalike, the backup plane for the one regularly used by the president, flew low over Manhattan on Monday morning, accompanied by two F-16 fighters, so Air Force photographers could take pictures,” the New York Times reports. “But a lack of awareness about the flyover led to the evacuation of several buildings in Lower Manhattan and Jersey City, N.J., and perplexed officials at the Port Authority of New York and New Jersey and other authorities were inundated with calls from anxious ferry passengers, office workers and residents in the area.” RAW STORY has more details here. This video is from MyFoxNY.com, broadcast Apr. 27, 2009.

lawmakers express outrage over nyc plane scare
from raw replay: Sen. Chuck Schumer is outraged that the FAA didn’t notify citizen of New York City before a plane used as Air Force One buzzed the city. “It is absolutely outrageous and appalling to think that the FAA would plan such a photo shoot and not warn the public, knowing full well New Yorkers still have the vivid memory of 9/11 sketched in their minds,” he said during a press conference. This video is from MSNBC’s News Live, broadcast Apr. 27, 2009.

video: jon stewart to 747: stay the f**k away from ground zero

white house apologizes over air force one 'blunder'
from dpa: The White House issued an apology Monday after a presidential plane flying low over New York for a photo shoot left people on the ground panicking over worries a terrorist attack was underway. The massive Boeing 747, shadowed by an F-16 fighter jet, was passing over the Hudson River at times at altitudes lower than some buildings in downtown Manhattan. Hundreds of people rushed out of their offices and onto the street, fearing another September 11, 2001-style attack. New York Mayor Michael Bloomberg expressed outrage that he had not been informed of the flight, although the Air Force and Federal Aviation Administration said local police had been informed.

video: obama on plane scare: 'it was a mistake'

update: manhattan fly-over & the national security state
from kurt nimmo: CBS in New York reports that the Pentagon knew its photo-op flyover above Manhattan would raise “public concern” and frighten New Yorkers but pulled off the stunt anyway. “Federal officials knew that sending two fighter jets and Air Force One to buzz ground zero and Lady Liberty might set off nightmarish fears of a 9/11 replay, but they still ordered the photo-op kept secret from the public,” reports Marcia Kramer WCBS TV.