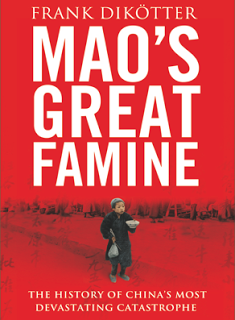 from independent: Mao Zedong, founder of the People's Republic of China, qualifies as the greatest mass murderer in world history, an expert who had unprecedented access to official Communist Party archives said yesterday.

Speaking at The Independent Woodstock Literary Festival, Frank Dikötter, a Hong Kong-based historian, said he found that during the time that Mao was enforcing the Great Leap Forward in 1958, in an effort to catch up with the economy of the Western world, he was responsible for overseeing "one of the worst catastrophes the world has ever known".

Mr Dikötter, who has been studying Chinese rural history from 1958 to 1962, when the nation was facing a famine, compared the systematic torture, brutality, starvation and killing of Chinese peasants to the Second World War in its magnitude. At least 45 million people were worked, starved or beaten to death in China over these four years; the worldwide death toll of the Second World War was 55 million. 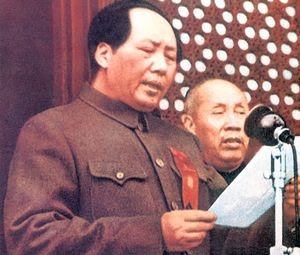 Mr Dikötter is the only author to have delved into the Chinese archives since they were reopened four years ago. He argued that this devastating period of history – which has until now remained hidden – has international resonance. "It ranks alongside the gulags and the Holocaust as one of the three greatest events of the 20th century.... It was like [the Cambodian communist dictator] Pol Pot's genocide multiplied 20 times over," he said.

Between 1958 and 1962, a war raged between the peasants and the state; it was a period when a third of all homes in China were destroyed to produce fertiliser and when the nation descended into famine and starvation, Mr Dikötter said.

His book, Mao's Great Famine; The Story of China's Most Devastating Catastrophe, reveals that while this is a part of history that has been "quite forgotten" in the official memory of the People's Republic of China, there was a "staggering degree of violence" that was, remarkably, carefully catalogued in Public Security Bureau reports

background on mao & the eugenics elite
1973. After a trip to China, David Rockefeller praised Mao Tse-tung who had slaughtered over 40 million people. His report, "From a China Traveler," highlights the goals presented in UN reports such as "The Commission on Global Governance" and UNESCO's Our Creative Diversity. Both focus on lofty ideals such as peace, harmony and unity in the communitarian "global" village -- a vision that demands absolute control and universal participation in facilitated small groups (modeled by the hierarchy of "soviets" or councils in Communist lands): "One is impressed immediately by the sense of national harmony... Whatever the price of the Chinese Revolution it has obviously succeeded... in fostering high morale and community purpose. General social and economic progress is no less impressive....The enormous social advances of China have benefited greatly form the singleness of ideology and purpose... The social experiment in China under Chairman Mao's leadership is one of the most important and successful in history." New York Times, 8-10-1973.