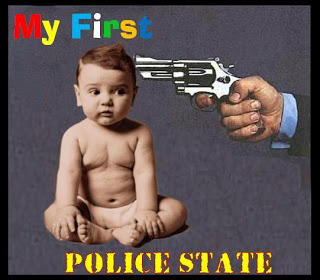 media monarchy was live on 101.1fm kufo in portland to discuss the police state: is it coming or is it already here? thanks to clyde lewis, alex ansary & zero point radio for making this incredible discussion happen ... and thanks to glenn @ cascadia public radio for the recording

the following article from clyde lewis was the basis for our conversation - ground zero media: my first police state

from clyde lewis: On February 3rd 2010, Dennis Blair, director of President Obama’s National Intelligence told the House Intelligence Committee that it was now “defined policy” that the U.S. government can murder its own citizens. This execution would be based solely on assumption that the citizen is a threat to national security. This would be carried out with no arrest, or trial, or conviction, just execution on suspicion only. Plain and simple the police state has now advanced to policies that are similar to Salin’s Russia. The executive branch has assumed the right to murder Americans who it deems a “threat.” They allegedly won’t kill you on American soil—but take a step out of the United States and the intelligence community can wipe you out, if they see you as a threat to the country. Where does it end really? The idea that you can be killed anywhere by your own government demonstrates the grandeur of the police state and how it goes unchallenged by Americans who see it as a necessary evil against terrorism. The policies of overseas assassinations being carried over to the states is probably not a far reach. Americans have already been killed for their beliefs from the incidents at Waco to Ruby Ridge to the Black Panthers a dark side to police state activity exists and persists. To execute anyone without a trial takes away their constitutional right of due process. This is what goes on during a police state. If this is your first one – then I welcome you.