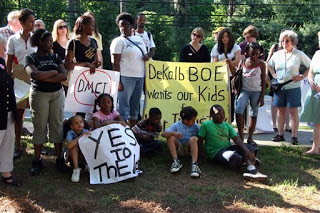 military-backed public schools on the rise in US

from ap: The U.S. Marine Corps is wooing public school districts across the country, expanding a network of military academies that has grown steadily despite criticism that it's a recruiting ploy. The Marines are talking with at least six districts — including in suburban Atlanta, New Orleans and Las Vegas — about opening schools where every student wears a uniform, participates in Junior ROTC and takes military classes, said Bill McHenry, who runs the Junior ROTC program for the Marines. Those schools would be on top of more than a dozen public military academies that have already opened nationwide, a trend that's picking up speed as the U.S. Department of Defense looks for ways to increase the number of units in Junior ROTC, which stands for Reserve Officers Training Corps. "Many kids in our country don't get a fair shake. Many kids live in war zones. Many kids who are bright and have so much potential and so much to offer, all they need to be given is a chance," McHenry said. "If you look at stats, what we're doing now isn't working."