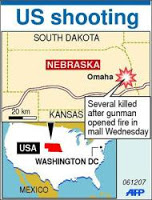 citizens for legitimate government & total411 have compiled the following information from mainstream media reports regarding the mass shooting today in Nebraska...

from mirror uk: A crazed gunman shot eight people dead before killing himself in a crowded shopping mall last night - an hour after President [sic] Bush gave a speech nearby. Five others were wounded in the rampage, two critically. Though police suspected the gunman was acting alone, a second man wearing camouflage was arrested. Last week a grenade was found hidden behind a plant stand at the same mall. 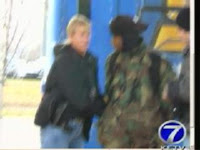 from msnbc: A viewer photo shows a man in handcuffs after shots were fired inside the Von Maur store at Westroads Mall on Wednesday afternoon. A description of the shooter, broadcast over scanners, was that he was in an Army-green vest and was holding a rifle. The viewer's photo showed a young man in [Army] fatigues surrounded by police and apparently in handcuffs. Police have not yet confirmed an arrest. It was reported by KETV crews that the man in fatigues was found under a bus bench. KETV NewsWatch 7's Carol Kloss said she could see a man in cuffs and a black, hooded sweatshirt surrounded by police.

from ny daily news: A rifle-toting gunman went on a holiday murder spree in a crowded Nebraska mall Wednesday, killing eight shoppers. The killer, identified as Robert Hawkins, 19, left behind a note promising to "go out in style," Omaha television station KETV reported. Hawkins, his hair in a military buzz cut, was reportedly wearing a camouflage vest and carrying a black backpack when he walked into the mall. It was the deadliest U.S. attack since a gunman left 32 people dead on the Virginia Tech campus in April, and the second mass shooting at a mall this year. Five people were killed and four wounded at a Salt Lake City mall in February, when police killed the gunman responsible. 'Witnesses described the suspect as a man wearing Army fatigues or camouflage.' [This reference has been purged from the New York Daily News article, but Google retained the 'Army fatigues' reference. The Army reference disappeared from the mainstream media quicker than a snowdrift in July. -- Lori Price]

Two men arrested in military fatigues in shopping mall shooting spree -- 'Guys dressed in camouflage, with guns, leaving a school bus, acting suspiciously before the shooting. Earlier in December, a live grenade was removed from this shopping mall... It was completely random -witness [the shooting]' (MSNBC live, 4:15PM EST 05 Dec 2007)

man guilty in grenade plot on shopping mall
from reuters: A man charged with plotting to set off hand grenades inside a shopping mall in what the FBI said he intended to be a "violent jihad" pleaded guilty in the case on Wednesday. The U.S. Attorney's office said Derrick Shareef, 23, of Rockford, Illinois, a U.S.-born convert to Islam, pleaded guilty in federal court to one count of attempting to use a weapon of mass destruction. Investigators said he had been under surveillance from the very beginning of his plotting and the public was never in danger.

update: shootings monthly cycle
from loren coleman: In the book, 'The Copycat Effect', a clear anniversary cycle is noted in well-publicized shootings, which can serve a predictive function. Often these patterns follow a monthly cycle. Currently, there is a strong indication the shootings are following that specific model.