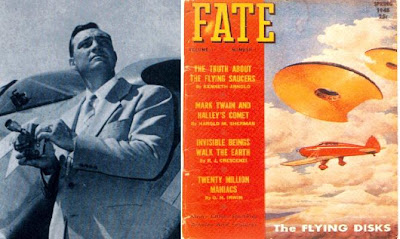 The Maury Island Incident of June 21, 1947 and Kenneth Arnold sighting near Mt Rainier WA, three days later, represent the dawn of modern UFO era. The latter incident is also when "saucers" came into the American lexicon, a description given by Arnold of their flight, "[like] a saucer skipped across water". The Maury Island case remains an enigma as many believe it a hoax. Harold Dahl spotted several donut-shaped UFOs with one in trouble, while at work on a boat near the island. A slag-like material dropped from the distressed UFO that struck Dahl's boat, injuring his son and killing the family dog. Fred Crisman, who was Dahl's boss, is informed of the boat's damage. The story gets weird when Dahl receives an implied threat from a "Men In Black" (MIB), who invited Dahl to breakfast the very next morning. Dahl reports later his son disappeared to turn up waiting tables in Montana without any memory how he got there?

A very good account of the Maury Island incident is provided by WEIRD U.S. website. "Dahl and Crisman sent a package to publisher Ray Palmer in Chicago...A few weeks later, Palmer contacted Kenneth Arnold, who had begun investigating UFOs...Arnold arrived in Tacoma in late July with airline pilot E.J. Smith...On the afternoon of July 31, Captain Lee Davidson and First Lieutenant Frank Brown of the U.S. Army Air Force flew up to Tacoma from Hamilton Field, California...In addition to being pilots, the two men were intelligence specialists. They met with Arnold, Smith, and Crisman for several hours. The two officers were in a hurry to return to base and participate in ceremony and celebration of the Air Force's formal split from the Army the next day. Davidson and Brown never made it as their B-25 bomber went down near Kelso, WA in early hours of August 1st to become Air Force's first fatalities. A UFO Hunter episode suggests if the metal slag onboard the B-25 were magnetized, it may have ignited a fire in the plane's electrical components?

The overshadowing figure is Fred Crisman, who keeps showing up, in Dallas, New Orleans, years later back in Tacoma much as you would expect from an agency asset. Hal McKenzie suspects in a Conspiracy Plant article on the Kenn Thomas book, "Maury Island UFO," Fred Crisman is a key figure, "some spooks haunt both JFK and UFO coverups". Kenn Thomas has also a new book on the coverups, "JFK and UFO". The present writer leans towards a campaign to coverup testing of experimental craft by aerospace companies in area.

Kenneth Arnold investigated UFOs, after his sighting, to write story in Palmer publication FATE magazine, "I Did See the Flying Disks," in the very first issue (pictured). Arnold also wrote a book in 1952 about his experience, "The Coming of the Saucers". Please enjoy the following 1950 Edwin R Murrow interview of Arnold (mp3).

Ground Zero Live with Clyde Lewis interviewed author Kenn Thomas and Bill Birnes, show host of UFO Hunters, providing additional insight into both the incident and the B-25 crash. It's all good stuff!