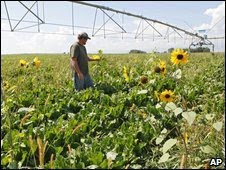 from bbc: France's highest court has ruled that US agrochemical giant Monsanto had not told the truth about the safety of its best-selling weed-killer, Roundup. The court confirmed an earlier judgment that Monsanto had falsely advertised its herbicide as "biodegradable" and claimed it "left the soil clean". The company was fined 15,000 euros (£13,800; $22,400). It has yet to comment on the judgment. Roundup is the world's best-selling herbicide. Monsanto also sells crops genetically-engineered to be tolerant to Roundup. French environmental groups had brought the case in 2001 on the basis that glyphosate, Roundup's main ingredient, is classed as "dangerous for the environment" by the European Union. In the latest ruling, France's Supreme Court upheld two earlier convictions against Monsanto by the Lyon criminal court in 2007, and the Lyon court of appeal in 2008, the AFP news agency reports. Earlier this month, Monsanto reported a fourth quarter loss of $233m (£147m), driven mostly by a drop in sales of its Roundup brand.