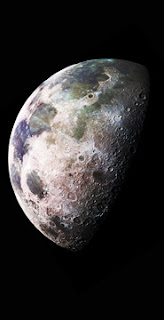 from times online: A NASA spacecraft will deliberately crash into the Moon next week on a mission that could enhance the prospects of establishing a manned lunar base.

Only two weeks after three probes discovered water on the Moon, the Lunar Crater Observation and Sensing Satellite (LCROSS) will blast two huge chunks out of its surface to establish whether it exists in a form that could be exploited by astronauts.

In the early hours of Friday morning [oct9], the LCROSS probe will separate from the Centaur upper stage of the rocket that carried it to lunar orbit, and send the spent module crashing into the Cabeus crater at the Moon’s south pole.

update: US spacecraft crash into moon in search for water
from reuters: Searching for stocks of water on the moon, NASA crashed two spacecraft into an eternally dark lunar crater on Friday, hoping to splash ice into the light where instruments could assess it. A two-ton empty rocket stage hit the dark Cabeus crater near the moon's south pole at about 4:31 a.m. PDT (7:31 a.m. EDT) and a second craft crashed four minutes later. A camera on the following spacecraft did not capture an image of the impact as hoped, but scientists said they were confident that the explosive hit took place as planned. "We didn't see a big splashy plume like we wanted to see," said Michael Bicay, director of science at the National Aeronautics and Space Administration's Ames Research Center. Bicay said an infrared camera showed changes that suggested an explosion.