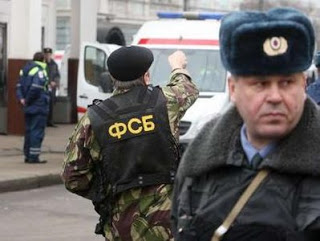 from paul joseph watson: Two separate bomb blasts that ripped apart trains on the Moscow Metro system, killing at least 34 people during morning rush-hour, have been blamed on female suicide bombers, but previous instances of terrorism in Russia were proven to be the work of the FSB security service itself.

“The first explosion took place on a train after it had stopped in the Lubyanka station in central Moscow, close to the headquarters of Russia’s FSB security service, a spokeswoman for the Russian emergencies ministry told AFP.”

Russian Federal Security Service chief Alexander Bortnikov has already blamed Chechen rebels for the attack, an explanation slavishly accepted by western media outlets like the BBC who are already running feature articles about the history of terrorism in Russia that completely fail to mention the FSB’s direct role in almost every major attack to have taken place over the last 10 years.

Since the explanation that two female suicide bombers with explosives strapped to their bodies were responsible for the bombing has come directly from the FSB, past history means we can only treat the official story with the utmost suspicion.

The notorious Russian FSB has a documented history of staging false flag events in order to accomplish political agendas.

update: bombs kill 12 in russia's dagestan region
from cnn: Twelve people - nine of them police officers - were killed Wednesday when two bombs exploded in Russia's southern republic of Dagestan, officials told CNN. Another 23 people, including 11 police officers, were hospitalized with wounds from the bombings, at least one of which was carried out by a suicide bomber, according to a spokesman for the Dagestan police and Vladimir Markin, a spokesman for the Investigative Committee in the Russian prosecutor general's office. It happened two days after female suicide bombers killed at least 39 people on the Moscow metro.