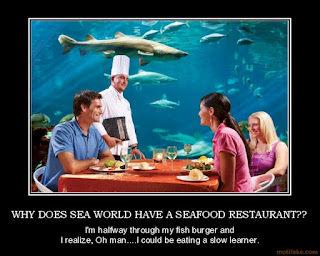 from barfblog: Do fish tire of eating seafood? Do fish like seafood as long as it doesn’t taste too much like fish? Do fish care if seafood is served at Sea World? People for the Ethical Treatment of Animals Australia thinks so, and wrote to Sea World manager Jeff Hughes asking for all fish dishes to be removed from the Main Beach marine park’s menu, claiming it is akin to “serving poodle burgers at a dog show.” PETA Asia Pacific campaign co-ordinator Claire Fryer said the educational marine park was hypocritical for selling flake, calamari and shrimp at the Dockside Tavern and cod burgers at the Top Terrace Food Court. Ms Fryer said the way in which fish were caught for fish farms and confined to “cramped, filthy tanks before being violently killed,” was inhumane. Sea World refused to comment and has not replied to PETA.