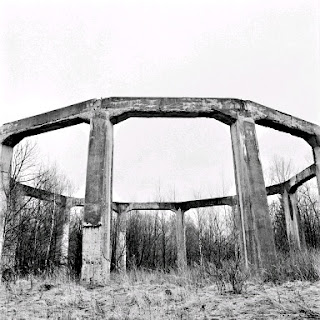 Polish artist Hubert Czerepok fascinated over the years by Nazi myths of Nazi UFOs, the Antartic base called New Swabia and the US Navy's unsuccessful 1946 Operation High Jump, explored his artistic concepts in an art exhibit, last year, in Peenemunde, Germany, where the V-2 rocket was developed on the Baltic coast.   "Myths Of Nazi UFO Technology" is a nice recap of the myths surrounding Nazism.  "He feels artists often occupy the gray area between fact and fiction.  As an artist, you are in a position to reconstruct things which did not exist, things which are not certain." Czerepok impressed by the detail of the information available on the flying discs, "according to believers, the disks were up to 71 meters (230 feet) in diameter and could reach speeds of up to 5,000 kilometers per hour (3,100 miles per hour"), so Czerepok attempts in his exhibit to deconstruct the myths.

The peculiar structure above outside of the village of Nowa Ruba in Poland’s Owl Mountains , whose purpose remains a mystery, is of particular interest. “Some believe it was some kind of storage facility or an ammunition factory. Others believe it was used for an anti-gravity engine.”  Czerepok believes his exhibition is about history, some people view as science fiction and others historical facts. It’s open for all possible interpretations and different audiences.  Are the Nazi UFOs only comic book myths?

Do questions remain?  Why was the Antartic expedition Operation High Jump cut short?  What became of the detailed plans and models for the Nazi UFOs that grew out of the Haunebu project?   Was anti-grav tech taken underground into black ops?  There is, at least, one more Nazi myth Czerepok missed, which is the military base Schwarze Sonne (Black Sun) on the dark side of the moon.  A new sci-fi movie, "Iron Sky" is in the beginning stages of production and will be based on the myth the Nazis return to invade the Earth in 2018?  Is there something more to the Nazi myths?