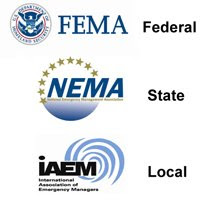 from kurt nimmo: FEMA is preparing to take its martial law exercises to the next level this July. According to a factsheet buried on the FEMA website, the agency will host National Level Exercise 2009 (NLE 09) on July 27 through July 31, 2009. “NLE 09 will be the first major exercise conducted by the United States government that will focus exclusively on terrorism prevention and protection, as opposed to incident response and recovery,” the factsheet states. It is designated as a Tier I National Level Exercise, or TOPOFF, which are exercises conducted annually in accordance with the National Exercise Program (NEP), “which serves as the nation’s overarching exercise program for planning, organizing, conducting and evaluating national level exercises,” according to FEMA. NLE 09 “will focus on intelligence and information sharing among intelligence and law enforcement communities, and between international, federal, regional, state, tribal, local and private sector participants” in the “aftermath of a notional terrorist event outside of the United States.” So-called “exercise play” will concentrate on “preventing subsequent efforts by the terrorists to enter the United States and carry out additional attacks... NLE 09 will be an operations-based exercise to include: activities taking place at command posts, emergency operation centers, intelligence centers and potential field locations to include federal headquarters facilities in the Washington D.C. area, and in federal, regional, state, tribal, local and private sector facilities in FEMA Region VI, which includes the states of Arkansas, Louisiana, New Mexico, Oklahoma and Texas."