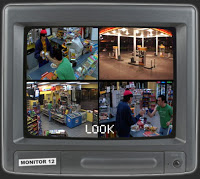 from alternet: Look, which has already won major kudos on the film festival circuit and will be in theaters this Friday, is sure to be a thought provoking and controversial film. It purports to be made entirely out of surveillance footage shot without the knowledge the people involved.

According to the film’s director Adam Rifkin, 37 states say it’s legal to out video cameras in public dressing rooms. Rifkin seeks to provoke audiences to ask themselves,

“Who is watching this footage and who is keeping it safe from public distribution? Who has access to it and for how long? What safeguards exist to make sure highlights of your ass are not making it onto the most viewed list on YouTube?”