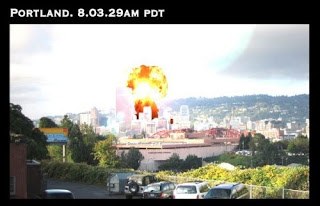 The next false flag event may take unexpected form, but groundwork reported in place for an attack! Leon Panetta, Defense Secretary nominee, warned at his confirmation hearing recently, "...next ‘Pearl Harbor’ could be a cyber attack." Alex Thomas provides in a recent article at the Intel Hub, "The Stage Is Set For a Nuclear False Flag," a thorough summary of steps pointing to a nuclear event. The most blatant are 25 letters that, "...claim nuclear bombs are hidden throughout the United States have been sent to multiple investigators and citizens in the Chicago area. The letter inside said, 'The Al-Qaeda organization has planted 160 nuclear bombs throughout the U.S. in schools, stadiums, churches, stores, financial institutions and government buildings.' It also said, 'This is a suicide mission for us,' reported CBS Chicago." The present writer wonders how many readers still take al-Qaida, a legion of western intelligence-trained actors, seriously?

Webster Tarpley exposed these methods in a 2009 Fort Hood shooting article and his 2005 book, "9/11 Synthetic Terror: Made In USA,"9/11 and other recent terrorist attacks represented provocations cynically orchestrated by privately controlled rogue networks operating within the US intelligence agencies for purposes of mass political manipulation." A Fox News report revealed cleric Anwar al-Awlaki has dined with brass at the Pentagon. Al-Awlaki is most dangerous, since he is an American-born citizen, whose arrest would open door for any American to be labeled "a terrorist".

The al-Qaida and bin Laden nuclear theme dates to a 2002 World Net Daily Article, whether bin Laden obtained 20 suitcase nukes in 1998 from Russian intelligence agents. How short is the collective American memory? Dick Cheney shared fears of nuclear threat in bizarre 2007 year. These reports of nukes smuggled into the United States or their threat, provide cover for nefarious acts by simply invoking very tired Boogeymen: bin Laden and al-Qaida.

The Intel Hub article continues with 2007 Minot missing nuke incident, where some speculated device was destined for the Middle East. Barksdale AFB is the originating base for B-52 flights overseas. An alternative and less likely view has missing nuke flown not straight to Barksdale but to Area 51, where adventurer Steve Fossett possibly saw too much and disappeared over Nevada desert. Fossett was found dead only months later in California. The intrigue goes further with possibility nuke ended up in downtown Portland, where radiation was detected during TOPOFF 4 drill.

"Portland, called "Little Beirut" by Bush cronies because of its enmity to Bush 41 and Bush 43, only made my top three list last summer, when it was designated as a target for a nuclear attack by successive exercises Noble Resolve and TOPOFF. I discovered that Stanford and Harvard had prepared a detailed nuclear fallout map for it, that national military commanders and state National Guard commanders were telling different stories about what the exercises were trying to accomplish, and that Portland's The Oregonian newspaper was doing everything it could to avoid investigating the frightening anomalies. I wasn't at all surprised that the last day of the exercises found the Homeland Security director Michael Chertoff in downtown Portland, which was largely closed down by an 'unexpected" bomb threat'."

The present writer was convinced of this special judgement reserved for the city after viewing coverage of 2002 Portland protests. There is only a gut feeling as to the validity of this apprehension but it is there. A bizarre 2009 slideshow "Operation Blackjack" at the Telegraph website, which can only be propaganda, reinforces a feeling of forboding as Portland, OR is also targeted there. Is it conveying a message of no act of insolence will go unpunished? The slideshow seems to serve as predictive programming, and possibly, an illuminati credo of absolving guilt by warning victims in advance?

Chicago is May's secondary target and on radar for several reasons. The former Sears Tower renamed Willis Tower is owned by Larry Silverstein and cannot dismiss another huge insurance scam. Rahm Emanuel is mayor of Chicago and rumored MOSSAD agent. Chicago is very corrupt with large criminal element. You cannot dismiss the similarities to the World Trade Center on 9/11. Bob Tuskin and James Evan Pilato discuss possibility on You Tube, "Is The Willis Tower Being Set Up For A False Flag Terror Attack?"

You may want to pick up a Geiger counter before they're out of stock! The present writer bets on blood sacrifice in elevated numbers to motivate populace to take on additional burdens and more wars. A cyber terrorist act or even radiation from nuclear plants, compromised by flooding, are insufficient but provide an additive effect of reduced fertility and increased death - and what seems in store for us?