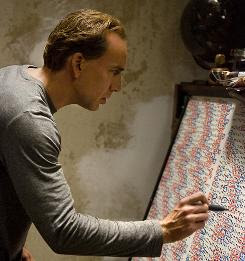 A webchat at Empire reveals some of the shamanistic practices Nicolas Cage uses to prepare for acting roles:

"It occurred to me, because I was doing a character as far out of our reference point as the spirit of vengeance, I could use these techniques. I would paint my face with black and white make up to look like a Afro-Caribbean icon called Baron Samedi, or an Afro-New Orleans icon who is also called Baron Saturday. He is a spirit of death but he loves children; he’s very lustful, so he’s a conflict in forces. And I would put black contact lenses in my eyes so that you could see no white and no pupil, so I would look more like a skull or a white shark on attack. On my costume, my leather jacket, I would sew in ancient, thousands-of-years-old Egyptian relics, and gather bits of tourmaline and onyx and would stuff them in my pockets to gather these energies together and shock my imagination into believing that I was augmented in some way by them, or in contact with ancient ghosts. I would walk on the set looking like this, loaded with all these magical trinkets, and I wouldn’t say a word to my co-stars or crew or directors. I saw the fear in their eyes, and it was like oxygen to a forest fire."