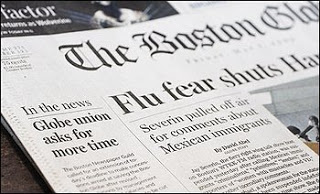 nytimes to file notice it will close boston globe

...in other news, freedom of the press declines worldwide...

from washington post: The New York Times Co. said last night that it is notifying federal authorities of its plans to shut down the Boston Globe, raising the possibility that New England's most storied newspaper could cease to exist within weeks.

After down-to-the-wire negotiations did not produce millions of dollars in union concessions, the Times Co. said that it will file today a required 60-day notice of the planned shutdown under the Worker Adjustment and Retraining Notification law.

The move could amount to a negotiating ploy to extract further concessions from the Globe's unions, since the notice does not require the Times Co. to close the paper after 60 days. The deadline, however, would put the unions under fierce pressure to produce additional savings, and the Boston Newspaper Guild promptly called the step a "bullying" tactic by the company.

Some industry observers have expressed skepticism that Times Co. Chairman Arthur Sulzberger Jr. would want his legacy to include the shuttering of the Globe, which his company bought in 1993...

"From the moment the Times Co. purchased The Globe in 1993, it has treated New England's largest newspaper like a cheap whore," former Globe columnist Eileen McNamara wrote last month in the Herald. "It pimped her out for profit during the booming 1990s and then pillaged her when times got tough. It closed her foreign bureaus and cheapened her coverage of everything from the fine arts to the hard sciences."

McNamara, who now teaches journalism at Brandeis University, ridiculed Sulzberger as "the boy genius whose crack management skills have helped drive the parent company of two of journalism's most respected newspapers to the brink of bankruptcy."

update1: globe shutdown averted (for now) but no deal with guild
from washington post: The New York Times Co. (NYSE: NYT) has backed off its threat to file notice today to close the Boston Globe despite failing to reach agreement with the Boston Newspaper Guild. The company says it has reached agreements with six of the paper's seven unions but that it is exploring alternatives "under both the Guild contract and applicable law to achieve as quickly as possible the workplace flexibility and remaining cost savings we need to help put The Globe on a sound financial footing."