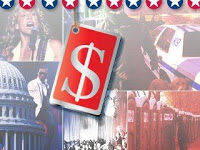 obamessiah coronation: such a big party for so little change

from abc: The country is in the middle of the worst economic downturn since the Great Depression, which isn't stopping rich donors and the government from spending $170 million, or more, on the inauguration of Barack Obama. The actual swearing-in ceremony will cost $1.24 million, according to Carole Florman, spokeswoman for the Joint Congressional Committee on Inaugural Ceremonies. It's the security, parties and countless Porta-a-Potty rentals that really run up the bill.

obama reaches out for mccain’s counsel
from nytimes: Not long after Senator John McCain returned last month from an official trip to Iraq and Pakistan, he received a phone call from President-elect Barack Obama. As contenders for the presidency, the two had hammered each other for much of 2008 over their conflicting approaches to foreign policy, especially in Iraq. (He’d lose a war! He’d stay a hundred years!) Now, however, Mr. Obama said he wanted Mr. McCain’s advice, people in each camp briefed on the conversation said. What did he see on the trip? What did he learn? It was just one step in a post-election courtship that historians say has few modern parallels, beginning with a private meeting in Mr. Obama’s transition office in Chicago just two weeks after the vote. On Monday night, Mr. McCain will be the guest of honor at a black-tie dinner celebrating Mr. Obama’s inauguration.

obama 'has 4 years to save earth'

big party, small change: baby, we were born to run...the empire
from chris floyd: I understand there's a big party going on in Washington this week, where hundreds of thousands of people are gathering to celebrate Bob Gates' retention as Pentagon chief. I mean, that is what this shindig is all about, isn't it? Hope and.... continuity? [See Arthur Silber for more.] We've got Bush's man still driving the war machine, we've got Bush's generals still waging the "War on Terror" all over the world. We've got a president who is eager to spend his "political capital" on slashing "entitlements," because everyone must sacrifice, everybody's "going to have to have some skin in this game" - everyone, that is, except for the president's Wall Street backers, who are about to receive yet another tranche of billions of taxpayer dollars in what they are now calling openly - and rightly - "opportunity funding." We've got a president honoring homophobic right-wing preachers who urge their followers to imitate the mindless zeal of Nazis and Bolsheviks in doing "whatever it takes" to establish Christianist dominion. We've got a president whose education chief believes in turning over the teaching of America's children to corporations -- and the military. We've even got a president who follows Dick Cheney's "good advice" on interrogating Terror War captives. It seems like the only place you can find "change" in Washington these days is in the cup of a street beggar, left homeless and jobless in the great bankrupting of the nation by Wall Street and the war machine.

obama’s web wasteland
from sitepoint: Tomorrow, Barack Obama will be sworn in as the 44th president of the United States and the first African-American chief executive of the country. That is indeed a historic moment in American politics and race relations, and Obama’s campaign certainly had a good deal of significance, especially in terms of how it utilized the Internet. The Internet will play a huge part in tomorrow’s inaugural festivities, but what has happened to the vast social networks that Obama built during that campaign? What will happen to them?

update: starbucks 'are you in' music video ad

celebrities make service pledge videos to obama on myspace
from raw story: On the eve of Barack Obama's inauguration more than 50 celebrities have teamed up on MySpace to record videos making a "pledge of service" to the next president of the United States.

350,000 conservatives pledge to block obama's socialistic agenda
from raw story: A conservative group, Grassfire.org, announced on Monday that its online petition pledging "patriotic" opposition to President-elect Barack Obama has gathered 350,000 signatures. (By presstime, the groups website was claiming a total of 371,453.) Grassfire's founder, Steve Elliot, stated, "This is not a personal attack on Barack Obama. On the contrary, this is a call to action for conservatives who profess love for our country and respect for our institutions. Our disagreements with the President are based in ideology and public policy only. From this firm foundation we are mounting a patriotic, resilient, conservative resistance to Obama's agenda."

masonic rituals live on in inauguration 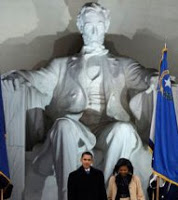 from washington times: President-elect Barack Obama's swearing-in Tuesday will incorporate several elements out of America's Masonic past. One-third of the signers of the Constitution, many of the Bill of Rights signers and America's first few presidents (except for Thomas Jefferson) were Freemasons, a fraternal organization that became public in early 18th-century England. Although it became fabulously popular in America, at one time encompassing 10 percent of the population, Pope Clement XII condemned Freemasonry in 1738 as heretical. The latest pronouncement was issued in 1983 by then-Cardinal Joseph Ratzinger - now Pope Benedict XVI - who called Masonic practices "irreconcilable" with Catholic doctrine. Still, as the first president, George Washington had to come up with appropriate rituals for the new country. He borrowed many of them from Masonic rites he knew as "worshipful leader" of a lodge in Alexandria. His Masonic gavel is on display at the Capitol Visitor Center. Until this inauguration, Washington's Masonic Bible - on which he swore his obligations as a Freemason - was used for the presidential oath of office. President-elect Barack Obama will use Abraham Lincoln's Bible.

from 9/11 blogger: DC 911Truth has produced an attractive new brochure to be distributed at the Obama Inauguration and surrounding events. On the cover, President Obama is asked to "help America learn the truth about 9/11," (160kb PDF) but the interior is aimed at general audiences who may not be aware of problems with the official account, or who may be quick to dismiss any questions as conspiracy theories.