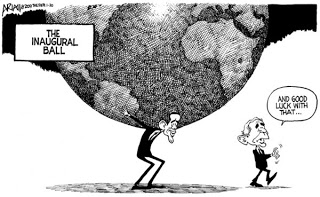 obamessiah coronation: yay! we’re out of the frying pan!

from ap: Stepping into history, Barack Hussein Obama grasped the reins of power as America's first black president on Tuesday, saying the nation must choose "hope over fear, unity of purpose over conflict and discord" to overcome the worst economic crisis since the Great Depression. In frigid temperatures, an exuberant crowd of more than a million packed the National Mall and parade route to celebrate Obama's inauguration in a high-noon ceremony. They filled the National Mall, stretching from the inaugural platform at the U.S. Capitol to the Lincoln Memorial in the distance. With 11 million Americans out of work and trillions of dollars lost in the stock market's tumble, Obama emphasized that his biggest challenge is to repair the tattered economy left behind by outgoing President George W. Bush.

as security envelopes capital, def sec robert gates hides out in a 'continuity of government' scheme as 'designated successor'
from danger room: As the crowds descend on the National Mall to hear President-elect Barack Obama take the oath of office, security in Washington is tighter than ever. Over 10,000 National Guard troops are on duty, part of a task force orchestrated by the Secret Service that includes uniformed police, plainclothes officers and representatives of dozens of government agencies... Perhaps the most important security precaution, however, is being taken by the Pentagon. As part of a "continuity of government" scheme, Secretary of Defense Robert Gates will go to an undisclosed location, where he will ride out the inaugural festivities as Obama's designated successor in the event of some catastrophe. The White House announced the plan on Monday; Pentagon spokesman told Agence France-Presse that Gates "will be spending the day at a military installation outside the national capital region." 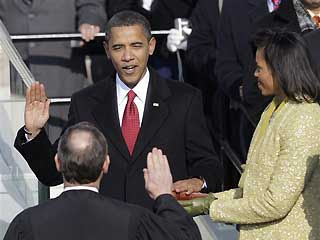 from lew rockwell: Ten thousand National Guardsmen, 7,500 active-duty soldiers, 25,000 cops from "99 federal, state and local law-enforcement agencies." A city "honeycombed" with "communication command centers" spying on supposedly free Americans with 5,265 surveillance cameras. And, as if we aren’t already up to our eyeballs in goons, an entire brigade of the US Army on call. The cost for this hyperbolic hysteria? Hundreds of millions at a time when many taxpayers can’t scrape together the next month’s mortgage. All for an inauguration that has attracted no "specific threats." 'Critics' contend that this is overkill. Go figure... You can say this for the TSA and the millions of Americans cheering an emperor who has no clothes: they certainly deserve one another.

from dpa: Washington thrummed with excitement Tuesday morning as tens of thousands crowded into subway cars and poured through the streets to celebrate the end of one era and the beginning of another. In just four hours, Barack Obama will take the reins of US power from George W Bush, and Metro riders at L'Enfant Plaza, stalled by train problems, began to sing. 'Goodbye Bush, Goodbye Bush,' over and over and over they chanted. The mood was as much an outpouring of support for the country's first African-American president as it was a celebration of the Republican president's departure after eight increasingly unpopular years in the White House. 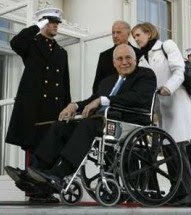 from raw story: Outgoing Vice President Dick Cheney will attend President-elect Obama's inauguration in a wheel chair, White House Press Secretary Dana Perino said on Monday. Cheney was moving boxes into his new residence in McLean, Va., when he pulled a muscle in his back. Cheney's doctor said he will need to travel by wheelchair for several days, according to a published report.

how obama is wooing the military 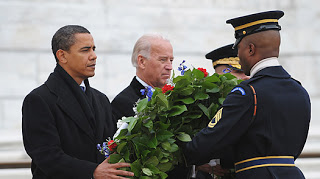 from time: Amid all the pomp and solemnity surrounding his arrival in Washington, Barack Obama found time to perform a couple of quiet salutes to an important constituency. On Sunday morning, he and Vice President–elect Joe Biden placed a wreath at the Tomb of the Unknown Soldier in Arlington National Cemetery. On Monday morning, the President-elect slipped over to Walter Reed Army Medical Center for an unannounced visit with troops wounded in Afghanistan and Iraq. Much of the country may have missed those brief visits, but the men and women of the U.S. military didn't... And so, as far as the courtship is going, Obama is getting a solid salute back from the rank and file.

martin luther king on war: silence is betrayal
from brasscheck tv: Yesterday was Martin Luther King day. Today, the US inaugurates a new president who happens to be black. Some people connect the two events. They can't be serious. Even after the "cease fire," civilians in Gaza are still being slaughtered and Obama's silence is deafening. Like McCain, Obama went to AIPAC on bended knee to get their blessing. It's an insult to King and his memory to compare the two. Obama needs to earn the comparison and he's far from it right now.

obama to defend telecom spy immunity
from threat level: The incoming Obama administration will vigorously defend congressional legislation immunizing U.S. telecommunication companies from lawsuits about their participation in the Bush administration's domestic spy program. That was the assessment Thursday by Eric Holder, President-elect Barack Obama's choice for attorney general, who made the statement during his confirmation hearings before the Senate Judiciary Committee.