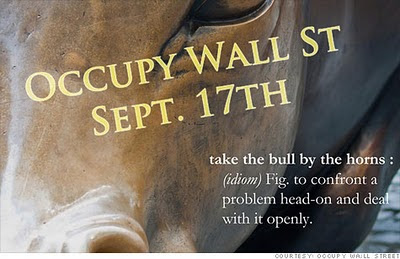 from ibtimes: Protestors involved with the "Occupy Wall Street" demonstration have started their pilgrimage toward Wall Street, where they have started to set up camp for an indeterminable amount of time in order to curb the influence of big business over Washington lawmakers. As of noon, hundreds of protestors gathered at Bowling Green Park in Manhattan, home of the iconic charging bull in New York's Financial District as they prepare to "take the bull by the horns," as one flyer said, ABC News reported.

"The one thing we all have in common is that We Are The 99% that will no longer tolerate the greed and corruption of the 1%," said a statement on the Occupy Wall Street Web site. Apparently the movement, which is an offshoot of online magazine AdBusters, is angered by what it calls the principle of "profit over and above all else." This, they say, has dominated America's economic policies and the way in which Americans view culture and humanity.