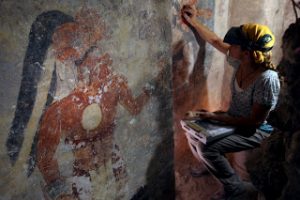 from nationalgeographic.com: A vast city built by the ancient Maya and discovered nearly a century ago is finally starting to yield its secrets. Excavating for the first time in the sprawling complex of Xultún in Guatemala’s Petén region, archaeologists have uncovered a structure that contains what appears to be a work space for the town’s scribe, its walls adorned with unique paintings — one depicting a lineup of men in black uniforms — and hundreds of scrawled numbers. Many are calculations relating to the Maya calendar. One wall of the structure, thought to be a house, is covered with tiny, millimeter-thick, red and black glyphs unlike any seen before at other Maya sites. Some appear to represent the various calendrical cycles charted by the Maya — the 260-day ceremonial calendar, the 365-day solar calendar, the 584-day cycle of the planet Venus and the 780-day cycle of Mars, reports archaeologist William Saturno of Boston University, who led the exploration and excavation…The discovery is reported in the June issue of National Geographic magazine and in the May 11 issue of the journal Science. The project scientists say that despite popular belief, there is no sign that the Maya calendar — or the world — was to end in the year 2012, just one of its calendar cycles. “It’s like the odometer of a car, with the Maya calendar rolling over from the 120,000s to 130,000,” said Anthony Aveni, professor of astronomy and anthropology at Colgate University, a coauthor of the Science paper. “The car gets a step closer to the junkyard as the numbers turn over; the Maya just start over.”