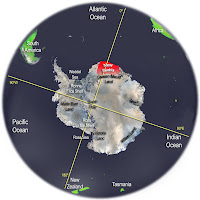 ﻿﻿Operation High Jump organized by Rear Admiral Richard E. Byrd, was ostensibly an exploration expedition to seek feasibility of establishing bases in Antarctica and map the continent. Journalists were suspicious of the true purpose, given the size of the force: 4700 men, 13 support ships and an aircraft carrier, the USS Phillipine Sea. Three operating groups set sail with the Western Group reaching the Marquesas Islands of French Polynesia, on December 12, 1946, to set up weather monitoring stations. The Eastern Group reached Peter I Island in late 1946 about 280 miles off the coast of Antarctica. The Central Group reached the Bay of Whales a natural iceport in the Ross Ice Shelf on January 15, 1947, cleared runways on the ice and dubbed the place Little America IV. The expedition was cut short by six months and ended in late February. Was it a hastily called for retreat?

Operation High Jump rumors persist of greater losses and the suspected result of battle with a Nazi presence. Dozens of Nazi submarines and thousands of their military men remained unaccounted for after the war. These hard facts added credibility to the belief the operation's true intent was to eradicate Station 211 aka Neu Schwabenland. The government files about the operation are still classified to this day!

On March 5, 1947, the "El Mercurio" newspaper of Santiago, Chile ran an article which quoted Admiral Byrd, he “didn’t want to frighten anyone unduly...a bitter reality that in case of a new war the continental United States would be attacked by flying objects which could fly from pole to pole at incredible speeds”. One can add the 1943 comment of German Grand Admiral Karl Donitz, "the German submarine fleet is proud of having built for the Führer in another part of the world a Shangri-La on land, an impregnable fortress", while unsubstantiated, only can be viewed as stoking fires for conspiracy of an "Antarctic Reich".