from afp: World markets suffered massive losses Monday, striking four-year lows, as panic-stricken investors doubted whether a Wall Street bailout package would stem the global financial crisis. London, Frankfurt and Paris all tumbled more than six percent approaching the half-way mark while a 15-percent dive in Moscow forced a halt to Russian trading. "We have a seriously weak and fear driven market at our hands," said Tom Hougaard, chief market strategist at City Index. "It is anyone's guess where we will end the day."

from ap: Wall Street tumbled again Monday, joining a sell-off around the world as fears grew that the financial crisis will cascade through economies globally despite bailout efforts by the U.S. and other governments. The Dow Jones industrials skidded nearly 500 points and fell below 10,000 for the first time in four years, while the credit markets remained under strain. The markets have come to the sobering realization that the Bush administration's $700 billion rescue plan won't work quickly to unfreeze the credit markets, and that many banks are still having difficulty gaining access to cash. That's caused investors to exit stocks and move money into the relative safety of government debt.

kashkari (or cashcarry) to be tapped to head bailout 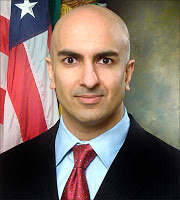 from ap: An official says the administration has decided to pick a key Treasury Department official to be the interim head of its $700 billion rescue effort for financial institutions. The official said Monday that Neel Kashkari, Treasury's assistant secretary for international affairs, will soon be announced as the interim head of Treasury's new Office of Financial Stability. The official asked not to be identified by name because the selection has not been announced publicly. The 35-year-old Kashkari is a former Goldman Sachs Inc. banker, the investment giant once headed by Treasury Secretary Henry Paulson. The new office was created by the emergency legislation enacted Friday to fund the largest government bailout in history.