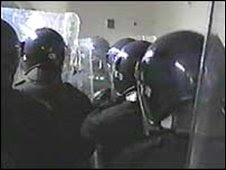 from bbc: Police officers from forces across the South West are to receive training to prepare them for riots. Police horses, dogs and a helicopter will be used to add realism during the two-day courses at Moreton-in-Marsh Fire College, Gloucestershire. Some officers will take on the role of hostile crowds in real-life scenarios such as raves, demonstrations and disorder at football matches. Missiles and petrol bombs will be thrown as part of the training. Officers attending the training will come from Gloucestershire; Dorset; Wiltshire; Avon & Somerset; and Devon & Cornwall Constabularies. Inspector Mac McGarry, of Gloucestershire Constabulary Operational Services, said: "These are very important and impactive sessions because it is essential all officers allocated to the Public Disorder Unit experience the sort of difficulties they will encounter in real-life situations. It also gives us the chance to test the command structure we have in place and the inter-operability with other forces."

The proposal would allow use of the military only if police are overwhelmed and cannot properly respond to a situation themselves.

"It is not to be used generally, but only in very specific cases," Interior Ministry spokeswoman Daniela-Alexandra Pietsch said.

The center-left Social Democratic Party — which makes up half of Chancellor Angela Merkel's coalition — had been opposed to the proposal but agreed late Sunday after working out an agreement that includes strict guidelines for domestic deployment.

"We're talking only about emergency help," Social Democrat parliamentary leader Peter Struck said. For example, the navy could be called to help in a situation where police maritime patrols were not sufficient, he said.

The proposal will now go to Merkel's Cabinet and then to parliament for approval.

Given Germany's militaristic past, many are hesitant to expand the role of soldiers domestically. Currently, the German military can be deployed within the country only in times of war, or to help with emergencies or natural disasters.

Following the announcement of the new proposal, opposition Left Party lawmaker Petra Pau accused the government of seeking to violate a constitutionally dictated division "between army, police and secret services."

"The military has no role domestically for historic, political, legal and professional reasons," Pau said.

Merkel's government at the time defended the deployment as necessary to secure the area and provide technical and logistical support for police. But the opposition Greens party criticized it as "a creeping breach of the constitution."