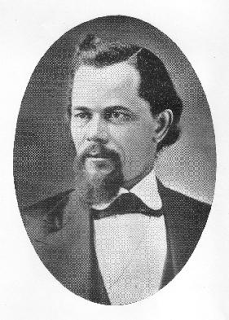 from Hermetic.com: Paschal Beverly Randolph (October 8, 1825 – July 29, 1875) was an American medical doctor, occultist, spiritualist, trance medium, and writer. Randolph is notable as perhaps the first person to introduce the principles of sex magic to North America, and, according to A.E. White, establishing the earliest known Rosicrucian order in the United States. Excerpt from an article about him on Hermetic.com:

"In Palestine, as he later wrote, he came into a growing understanding of the inner mysteries. He was discovering sexual magick, pure simple and straight forward:

One night - it was in far-off Jerusalem or Bethlehem, I really forget which - I made love to, and was loved by, a dusky maiden of Arabic blood. I of her, and the experience, learned - not directly, but by suggestion - the fundamental principle of the White Magick of Love; subsequently I became affiliated with some dervishes and fakirs of who, by suggestion still, I found the road to other knowledges; and of these devout practicers of a sublime and holy magic, I obtained additional clues - little threads of suggestion, which, being persistently followed, led my soul into labyrinths of knowledge themselves did not even suspect the existence of. I became practically what I was naturally - a mystic, and in time chief of the lofty brethren; taking the clues left by the masters, and pursuing them farther than they had ever been before; actually discovering the elixir of life; the universal Solvent, or the celestial Alkahest; the water of beauty and perpetual youth, and the philosopher’s stone...

Early in 1861 Randolph made a highly successful California lecture tour. He formed a Grand Lodge of Eulis in that state, perhaps his most successful effort in organizing. Subsequent years were characterized by meetings with celebrated persons, forming of local bodies, organization of the so-called "Rosicrucian Rooms" and publication of a number of metaphysical works, in which he places great emphasis on the importance of Will, concentration, and a magick of sexuality is hinted at. In privately circulated manuscripts, including "The Ansairetic Mystery - A New Revelation Concerning Sex" and "The Mysteries of Eulis" Randolph was to make plain to his growing cadre of followers a system of sexual magick. The man was not altogether unaware that he was living in the middle of the Victorian Era, and Randolph’s public pronouncements were phrased with some caution. "The entire mystery can be given in very few words," he tells the readers of "The Mysteries of Eulis,"

... Formulate the desire and keep it in mind during the whole period and especially when making the nuptive prayer, during which no word may be spoken, but the thing desired be strongly thought and these Principles enforced -- Volantia, Posism, Decretism. The end sought, the power coveted or the thing desired must be clearly defined in each mind -- then, and both after and before. These few lines invoke and embrace a mystery of superlative grandeur. The mystery cannot be abused, or worked to evil ends, for just as certain as they are attempted to be, just so sure will evil follow that attempt.

"The ejective moment, therefore, is the most divine and tremendously important one in the human career as an independent entity; for not only may we launch Genius, Power, Beauty, Deformity, Crime, Idiocy, Shame or Glory on the world’s great sea of Life, in the person of the children we may then produce, but we may plunge our own souls neck-deep in Hell’s horrid slime, or else mount the Azure as coequal associate Gods; for then the mystic Soul swings wide its Golden gates, opens its portals to the whole vast Universe and through them come trooping either Angels of Light or the Grizzly Presence from the dark corners of the Spaces. Therefore, human copulation is either ascentive and ennobling, or descensive and degrading..."

Throughout, he places emphasis on the union of love - sexuality - and will. "We proclaim the OMNIPOTENCE OF WILL!" he was to say in his last public address. After the U.S. Civil War concluded, Randolph consolidated his organization in the U.S. especially, and released through his own Ohio-based publishing house a rich treasure-trove of works on scrying, sexual magick and related topics, coincident with a proliferation of lodges under his direction. The Brotherhood of Eulis began openly proselytizing in 1870EV, coincident with the public debut of the Hermetic Brotherhood of Luxor, or Light, usually called simply "HB of L" in Europe and North Africa, under the leadership of Max Theon, Peter Davidson and others. The latter were organized in an identical manner to the Brotherhood of Eulis, and used Randolph’s works as their primary teaching texts.
If anything, it's interesting to think about and digest. Do the elite engage in elaborate sex rituals, and do they hold any significance over world events? For more reading, see the full text of his book "Seership."