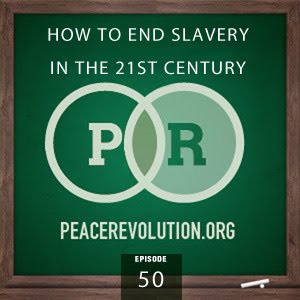 Peace Revolution: Episode050 – How to End Slavery in the 21st Century (and Beyond)

Episode050 Notes, Links, References:
1. Chip-in Widget link for: HISTORY… So It Doesn’t Repeat (Video Series Project)
2. Tragedy and Hope dot com
3. February’s Invitation to the Tragedy and Hope online community (link expires monthly)
4. Log in page for the Tragedy and Hope online community
5. Peace Revolution primary site (2009-2012)
6. Peace Revolution backup stream (2006-2012)
a. Includes the 9/11 Synchronicity Podcast (predecessor to Peace Revolution)
b. These 2 podcasts amount to 250+ hours of commercial-free educational content, which formulate a comprehensive and conscious curriculum.
c. The Ultimate History Lesson dot com
d. The Ultimate History Lesson Official Playlist (on YouTube)
e. The Ultimate History Lesson (Torrents)
I. (Video) The Ultimate History Lesson (5+ hours / 1080p HD mp4)
II. (Audio) The Ultimate History Lesson + Commentary (16+ hours / mp3)
A. If you’re interested in downloading the torrent versions, please send an email to: Editors@TragedyandHope.com with the word “torrent” in the subject line.
B. What is a Torrent? (on Wikipedia)
*uTorrent (software to create and download torrent files)
7. The Snake or the Rope? Courtesy of the Teaching Company Lectures on Freedom
8. Swaraj (on Wikipedia)
a. Swaraj can mean generally self-governance or "self-rule", and was used synonymously with "home-rule" by Gandhi[1] (Hindi: swa- "self", raj "rule") but the word usually refers to Gandhi's concept for Indian independence from foreign domination.[2] Swaraj lays stress on governance not by a hierarchical government, but self governance through individuals and community building. The focus is on political decentralization.[3] Since this is against the political and social systems followed by Britain, Gandhi's concept of Swaraj laid stress on India discarding British political, economic, bureaucratic, legal, military, and educational institutions.[4]
9.  Self-Governance (on Wikipedia)
a. Self-governance is an abstract concept that refers to several scales of organization.
b. It may refer to personal conduct or family units but more commonly refers to larger scale activities, i.e., professions, industry bodies, religions and political units (usually referred to as Local Government), up to and including autonomous regions and aboriginal peoples (or others within nation-states who enjoy some sovereign rights). It falls within the larger context of governance and principles such as consent of the governed, and may involve non-profit organizations and corporate governance.
c. It can be used to describe a people or group being able to exercise all of the necessary functions of power without intervention from any authority which they cannot themselves alter. Self rule is associated then in contexts where there is the end of colonial rule, absolute government or monarchy, as well as demands for autonomy by religious, ethnic or geographic regions which perceive themselves as being unrepresented or underrepresented in a national government. It is therefore a fundamental tenet of republican government and democracy as well as nationalism. Gandhi's term "swaraj" (see also "satygraha") is a branch of this self rule ideology. Another major proponent of self-rule when a government's actions are immoral is Thoreau.
a. Generally when self-governance of nation-states is discussed, it is called national sovereignty - a concept important in international law.
10.  Who is Frederick Douglass?
a. Frederick Douglass (on Wikipedia)
b. Frederick Douglass (Library of Congress Archives)
11.  George Santayana and the mis-attributed phrase
12.  The Ultimate History Lesson on “The Power Hour” radio show on GCN Network
13.  Jan Irvin’s interviews with Larken Rose on Gnostic Media dot com
a. Larken Rose interview, pt. 3 – “Government – The Fallacy of Ad Verecundiam, pt. 2” – #137
14.  “The Most Dangerous Superstition” @ www.LarkenRose.com     a. See also: “The Iron Web” by Larken Rose
15.  Corbett Report Episode 218 – The Philosophy of Liberty: The Magna Carta

previous: Episode049 - The Fallacy of Authority / The Most Dangerous Superstition