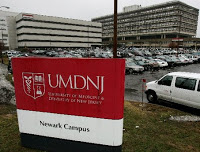 from ahn: The frozen remains of two mice infected with the bubonic plague are missing from a New Jersey bioterror research facility, and the facility waited seven weeks to report the incident to federal and state authorities. Officials with the University of Medicine and Dentistry of New Jersey in Newark, where the remains went missing, and FBI officials, said the missing mice pose no public health threat. This is the same facility where three live plague-inflected mice went missing in September 2005. Officials concluded those mice died. The frozen mice were noticed missing when an animal care supervisor went to prepare them for sterilization and incineration, the New Jersey Star-Ledger reported. University officials still think the remains were incinerated earlier, but lack the records to prove it. University officials say they contacted the FBI, the Centers for Disease Control and Prevention and state health officials when they realized the dead mice were unaccounted for.