your isp is watching you

google offers to track you by your cell phone 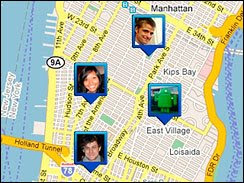 from cbsnews: Google is releasing free software Wednesday that enables people to keep track of each other using their cell phones. CNET got a sneak peek at it, and CNET-TV Senior Editor and Early Show contributor Natali Del Conte explained how it works on the show Tuesday. She says “Latitude” uses GPS systems and what’s called cell tower triangulation to do the job. The software seeks the closest three cell towers and, with GPS, combines the data to show where someone is. It is designed to work on any phone with Internet capabilities, except the iPhone. “Latitude” is being marketed as a tool that could help parents keep tabs on their children’s locations, but it can be used for anyone to find anyone else, assuming permission is given… CNET points out that, “To protect privacy, Google specifically requires people to sign up for the service. People can share their precise location, the city they’re in, or nothing at all.” “What we found in testing,” Lee added to CNET, “is that the most common scenario is a symmetrical arrangement, where both people are sharing with each other.”

when you watch these ads, they watch you

humans ‘will be implanted with microchips’

from ninemsn: All Australians could be implanted with microchips for tracking and identification within the next two or three generations, a prominent academic says. Michael G Michael from the University of Wollongong’s School of Information Systems and Technology, has coined the term “uberveillance” to describe the emerging trend of all-encompassing surveillance. “Uberveillance is not on the outside looking down, but on the inside looking out through a microchip that is embedded in our bodies,” Dr Michael told ninemsn. Microchips are commonly implanted into animals to reveal identification details when scanned and similar devices have been used with Alzheimers patients. US company VeriChip is already using implantable microchips, which store a 16-digit unique identification number, on humans for medical purposes… He also predicted that microchip implants and their infrastructure could eliminate the need for e-passports, e-tags, and secure ID cards. “Microchipping I think will eventually become compulsory in the context of identification within the frame of national security,” he said. Although uberveillance was only in its early phases, Dr Michael’s wife, Katina Michael – a senior lecturer from UOW’s School of Information Systems and Technology – said the ability to track and identify any individual was already possible. “Anyone with a mobile phone can be tracked to 15m now,” she said, pointing out that most mobile phone handsets now contained GPS receivers and radio frequency identification (RFID) readers. “The worst scenario is the absolute loss of human rights,” she said. Wisconsin, North Dakota and four other states in the US have already outlawed the use of enforced microchipping. “Australia hasn’t got specific regulations addressing these applications,” she said. “We need to address the potential for misuse by amending privacy laws to ensure personal data protection.”

can your name make you a criminal?

45,000 red light camera citations for a town of 38,500
from dallas morning news: A Duncanville City Council member wants to re-evaluate how the city issues citations to red-light runners and make it easier for suspected violators to request a jury trial. Paul Ford questions the nearly 45,000 citations issued in 2008 at four intersections monitored by cameras. Compared with Duncanville’s population of 38,500, he said, the number of citations seems excessive… According to Ford, the city will take in more than $3 million from citations issued in 2008. “These tickets are not safety-related,” Ford said. “They’re revenue-related. Period.”

utah senator wants scanners & database in restaurants
from salt lake tribune: A proposal to scan the driver licenses of bar patrons and keep it on file in a state law enforcement database is a good start, says Senate President Michael Waddoups, but he wants to see the program go further. Waddoups, R-Taylorsville, says he wants to see the database idea start with private clubs, but extend to restaurants that serve diners beer and liquor. That would greatly expand the scope of the data collection and create a new requirement for restaurants, which are not required to have people sign up as members in order to serve beer and liquor. There are fewer than 400 clubs and taverns and nearly 1,100 restaurants licensed to serve alcohol.