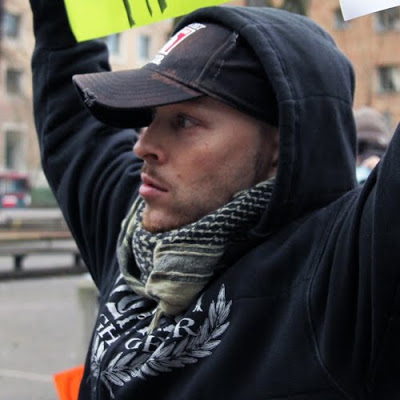 from daily vanguard: A tenured Portland State economics professor is currently suspended from teaching after he publicly accused a student during a class lecture of being an FBI informant and of trying to sell guns to students.

Professor John Hall, during his 2 p.m. “Economics 445/545: Comparative Economic Systems” class on Jan. 14th, verbally harangued student Zachary Bucharest for nearly half an hour, according to students in the class.

Hall, who has taught at PSU for 24 years, began the class with a lecture relevant to the course material but about halfway through the two-hour long class, he began to describe his experiences with law enforcement in other countries including Eastern Europe, according to a student who wished to remain anonymous.

Hall claimed to have been surveilled at times throughout his life and then told the class that an FBI informant and agent provocateur was in their midst. Hall said this person served as a sniper in the Israeli army and called him a killer with access to a personal arsenal. He then pointed at Bucharest and identified him as the informant in question, according to the unnamed student.

Bucharest, a student at PSU since the fall of 2006 and the current chief of staff for ASPSU, sat silently throughout the ordeal, according to students in the class. Hall accused Bucharest of trying to organize students to participate in violent acts against the university, according to the unnamed student.

Hall also said he believed that Bucharest is at times armed while on campus. He then put a letter on the document projector that he wrote to the FBI’s Portland Field Office. In the letter, Hall claims to know Bucharest’s identity as an agent. He then handed Bucharest a copy of the letter and told him to give it to his superiors.

After a time of silence, Bucharest got up and said that some of Hall’s claims about his military background were true, but that other claims the professor made were not. Bucharest left the classroom after being told by Hall to leave and not to come back to PSU, according to students. In an e-mail to students in the class on Jan. 17, economics department chair Randall A. Bluffstone said that he was aware of Thursday’s incident... Bluffstone reportedly said that the FBI informed the university that Bucharest does not work for them...

“I decided to take a stand. I observed the situation becoming extremely dangerous, not only for me but for about eight of my very finest students,” Hall said in the statement. “I felt that what I had to do should not have been my responsibility.” ...

Bucharest made a statement made through his attorney, Elden Rosenthal. “I have never been affiliated with the FBI in any way, and I have never been an informant,” the statement reads. “I have never in any way done anything to incite violence at PSU. I have admired Professor Hall since I first took a class from him, and cannot imagine what I did or said to cause him to treat me the way he did. I truly hope that the university will take steps to clear my name, and I also hope that something like this will never again happen to a PSU student.”

cia welcomes itself back onto american campuses
from democracy now: In the latest edition of CounterPunch magazine, the anthropologist David Price reveals the US intelligence community has established academic outposts at twenty-two US universities over the past four years. Government agencies, including the CIA, FBI, National Security Agency, Defense Intelligence Agency, and Homeland Security, have helped found “Intelligence Community Centers for Academic Excellence,” or ICCAEs—pronounced “Icky.” The ICCAEs aim to create a “systematic long-term program at universities and colleges to recruit and hire eligible talent for [intelligence community] agencies and components” and “increase the [intelligence recruiting] pipeline of students.”