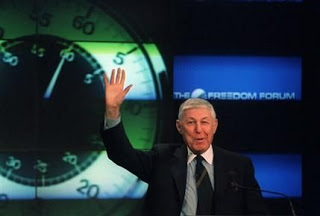 Hewitt, considered by many to be a major innovator in US television journalism, was diagnosed with cancer earlier this year and succumbed Wednesday surrounded by his family in Bridgehampton, New York.

He devoted most of his career, which spanned 60 years, to the hugely influential "60 Minutes," which introduced a magazine format to television news with a mix of hard hitting investigative reports, interviews and lighter offbeat pieces.

The show, which Hewitt ran as executive producer since it first aired in 1968, was widely considered the much-imitated gold standard of US television news. He stepped down from that post in 2004, becoming the executive producer of CBS News.

His career touched on many of the epochal moments of the last half century, directing the first network television newscast in May 1948 and coverage of the first televised US presidential debate between John F. Kennedy and Richard Nixon in 1960.

His death follows that of Walter Cronkite, renowned CBS television new host, who died in July.