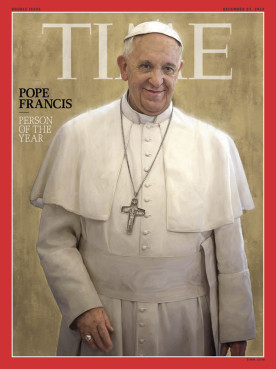 Religion Writers Agree: #PopeFrancis is No. 1 Newsmaker of 2013

from religionnews.com: He’s Time magazine’s Person of the Year, the most talked about topic on Facebook and the most popular baby namesake in Italy. No surprise, Pope Francis is also the top Religion Story of the Year and the Religion Newsmaker of the Year, according to a poll of Religion Newswriters members. Francis beat out his predecessor, Pope Emeritus Benedict XVI, who was the No. 2 story, and evangelist Billy Graham — who recently turned 95 and is reportedly ailing — for the newsmaker designation. Benedict made news when he became the first pope to resign in almost six centuries. The rankings were based on results of an online ballot conducted between Friday (Dec. 13) and Monday. Only Religion Newswriters Association members were eligible to vote.