“Security experts and airline officials agree privately that the simultaneous hijacking of four jetliners was an ‘inside job,’ probably indicating complicity beyond malfeasance.”
– Robert Novak, “Beyond Pearl Harbor” September 13, 2001 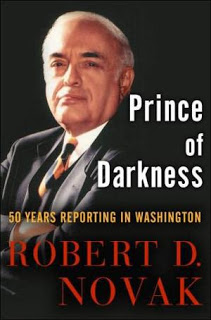 from 9/11 blogger: Now that the Prince of Darkness is dead, perhaps it is a good time to recall that 911blogger exposed Novak as one of the early commentators to identify 9/11 as an “inside job” in his September 13, 2001 column.

commentator robert novak dies aged 78
from reuters: Robert Novak, a conservative political columnist known as the “Prince of Darkness” and who unleashed a political firestorm by publishing the name of an undercover CIA operative, died on Tuesday. He was 78. Novak stopped writing his column in July 2008 after 45 years when he was diagnosed with a brain tumor, saying his prognosis was “dire.”