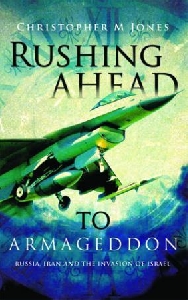 ‘rushing ahead to armageddon: russia, iran & the invasion of israel’

from christian newswire: With tensions in the Middle East escalating daily, the world seems to be on the brink of ruin. Russia is strengthening its ties with China, North Korea, Syria and Iran arming them with sophisticated military weaponry, building up its armed forces, and returning to old Cold War military tactics. Tensions between Israel and Iran have never been higher with each nation poised to strike against the other in a moment's notice.

It seems like we are standing on the cusp of Armageddon and the end of the world. The Gog/Magog war of Ezekiel 38 & 39 seems as if it is about to finally be fulfilled. It seems that in a moment's notice the events described in Ezekiel 38 & 39 could break out right before our eyes...or is it?

Rushing Ahead to Armageddon: Russia, Iran, and the Invasion of Israel ($18.99, paperback, 978-1-61579-796-7) takes on and challenges the popular end-times view of Ezekiel 38 & 39 through a thorough and exegetical analysis of Ezekiel's most well known and discussed prophecy with a conclusion that will shock its readers. Readers will be exposed to new and fresh insights regarding Ezekiel's prophecy about the future that have not been generally discussed in mainstream prophecy circles.