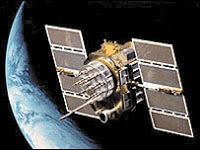 broken US spy satellite could fall to earth

from time: A large U.S. spy satellite has lost power and propulsion and could hit the Earth in late February or March, government officials said Saturday. The satellite, which can no longer be controlled, could contain hazardous materials, and it is unknown where on the planet it might come down, they said. The officials spoke on condition of anonymity because the information is classified as secret.

chavez urges withdrawals from US banks

from chicago tribune: Venezuelan President Hugo Chavez urged his Latin American allies on Saturday to begin withdrawing billions of dollars in international reserves from U.S. banks, warning of a looming U.S. economic crisis. Chavez made the suggestion as he hosted a summit aimed at boosting Latin American integration and countering U.S. influence... Chavez warned that U.S. "imperialism is entering into a crisis that can affect all of us" and said Latin America "will save itself alone."

from truthnews: It’s sold in the Washington Post - the CIA’s favorite newspaper - as a wonderful world of convenience come true for consumers: “RFID-enabled refrigerators could warn about expired milk, generate weekly shopping lists, even send signals to your interactive TV, so that you see ‘personalized’ commercials for foods you have a history of buying.” ... For autocrats, a world embedded with a constellation of ubiquitous RFID sensors would be ideal. “A Panopticon Singularity is the logical outcome if the burgeoning technologies of the singularity are funneled into automating law enforcement,” writes Charlie Stross. “Previous police states were limited by manpower, but the panopticon singularity substitutes technology, and ultimately replaces human conscience with a brilliant but merciless prosthesis.”

from atlanta journal-constitution: Three U.S. Army Rangers and another soldier were charged Friday with drug conspiracy after agreeing to an undercover scheme that involved the armed robbery of purported cocaine traffickers... "It is a sad day when members of one of America's most elite corps of soldiers, the Army Rangers, are alleged to have become involved in criminal activity," said U.S. Attorney David Nahmias. "These men were trained to defend the people and principles of this country, not to use their skills to steal cocaine from drug dealers at gunpoint."