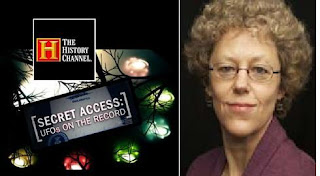 A new documentary on the History Channel,”Secret Access: UFOs On The Record,” provides nice summary of well-known cases but nonetheless still officially suppressed. A Herald Tribune article by Billy Cox via NHNE PULSE, “History Channel Gets It Right,” “…’Secret Access” report by The History Channel — ‘UFOs On The Record’ — is the sort of crisp advocacy journalism one might easily envision in PBS’ ‘Frontline’ rotation. Focused (if not a tad overproduced), expertly sourced, and devoid of the tripe that too often characterizes network programming on this issue, ‘UFOs On The Record’ is a foundational model for jump-starting a national conversation so desperately overdue.”

“The 96-minute documentary, built upon Leslie Kean’s UFOs: Generals, Pilots and Government Officials Go On the Record…For Kean’s readers, the “Secret Access” treatment covered familiar turf: the Phoenix Lights, the Rendlesham Forest incident, the 1989-90 Belgian wave, etc. But watching many of the players in the book — like former Federal Aviation Administration accidents division chief John Callahan, and retired Belgian Gen. Wilfried De Brouwer — as they physically reconstructed complex interactions between UFOs and jet planes brought the enormity of the transactions to life. And, fan though I am of the written word, there is no substitute for listening to audiotapes of air traffic/ground crew chatter trying to come to grips with a UFO idling over Chicago’s O’Hare International in 2006.”

Are we building to a disclosure crescendo? The hints are there but could still be years off? You get up to speed on a number of well-known cases in just an hour and a half and it’s free!  You can’t go wrong by watching Secret Access.