…an interesting note on this so-called super majority story is the term filibuster: it literally means ‘pirate‘ 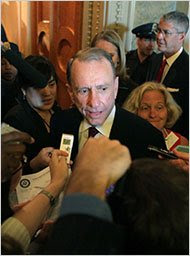 from dpa: Senator Arlen Specter, who has served as a Republican in Congress for nearly 30 years, announced Tuesday that he has switched parties, inching the Democrats closer to a super majority in Congress’s upper chamber. The Pennsylvania senator’s defection brings the Democrats to within one seat of the 60 needed in the 100-seat Senate to overcome Republican attempts to block votes on legislation, and enhances President Barack Obama’s ability to advance his ambitious legislative agenda. Specter, 79, would have faced a strong challenge within the Republican Party for the nomination for the 2010 election after angering conservatives by supporting Obama’s 787-billion-dollar economic stimulus package. “I now find my political philosophy more in line with Democrats than Republicans,” Specter said in a statement, pointing out that more then 200,000 Pennsylvania voters switched from Republicans to Democrats last year.

specter’s flirtation with democratic party has been long:
he recently noted that he was a ‘jfk democrat’ before becoming a republican 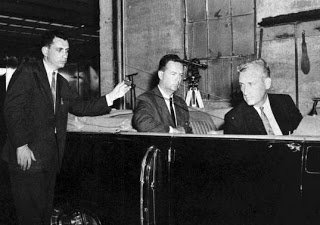 from copycat effect: Lest we forget, Arlen Specter has been involved in conspiracies for a long time, and Lee Harvey Oswald remains on his mind. Don’t take my word for this. Read what he said today. But first a bit of background. Guess who invented the “Magic Bullet Theory“? The Magic Bullet Theory was introduced by the Warren Commission (November 29, 1963 – September 24, 1964) to explain how three shots supposedly made by Lee Harvey Oswald resulted in the assassination of the United States President John F. Kennedy. The theory is credited to Warren Commission staffer Arlen Specter (currently the present U.S. Senator from Pennsylvania). Specter proposed that a single bullet, known as “Warren Commission Exhibit 399” (also labeled as “CE399“), caused all of the non-fatal wounds in both President Kennedy and Texas Governor John Connally on November 22, 1963, at Dealey Plaza, the site of the first Masonic temple in Dallas, Texas. The fatal head wound to JFK was caused by a bullet other than this alleged “Magic Bullet.” Today, April 28, 2009, as the media swarmed and tried to interview Senator Arlen Specter about his jump from the Republican Party to the Democratic Party, he is reported to have said, “I don’t think Lee Harvey Oswald had this big a crowd trailing him.”

What a curious thing to say.

specter’s jfk specter
from lisa pease: Given that Arlen Specter has decided to leave the Republican Party, I think it’s worth examining Specter’s history to see if he will be an asset or a burden for the Democratic Party. While Specter is perhaps most famous for coming up with the “single bullet theory” which purports that one bullet entered and exited two people (President Kennedy and Governor Connally) seven times, only to emerge nearly intact, his legislative efforts of late also give cause for concern… So why would the Democrats want Specter in their corner? The magic number. Sixty votes. A filibuster-proof majority, the holy grail of any administration. I can understand why President Obama himself has said he’ll raise money for Specter. But given Specter’s history, I can’t help but feel the Democrats are welcoming the fox into the hen house.

One response to “single bullet specter & the balance of pirate power”